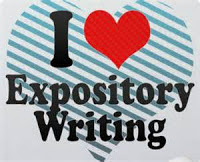 Since the beginning of the school year, each Monday, I’ve been posting  about the importance of understanding the key elements of finely-crafted expository nonfiction and helping students identify those features as they read and include them as they write.


For the first few weeks, I focused on the pre-writing process. Then, last week, I turned my attention to text characteristics and discussed text format. You can scroll down to read those posts.


Today, I’m going to look at an element of nonfiction writing that may be new to you—text scaffolding, a term that I first heard in a lecture by uber-talented children’s book editor Alyssa Pusey. 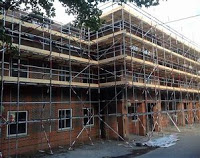 As you probably know, when a teacher utilizes instructional scaffolding, she gives students the support they need to gradually learn a new skill or concept. In the same way, an author can provide support to help readers understand a complex idea.


Because children have limited prior knowledge and may have trouble thinking abstractly, nonfiction books often include clusters of sentences that slowly build an explanation. Authors start by meeting readers where they are. Then they craft a series of connected sentences that act like building blocks to guide student thinking as they gradually develop an understanding of the concept.


Here’s the example Alyssa shared with me:

On page 7 of Super Gear: Nanotechnology and Sports Team Up, author Jennifer Swanson “deftly employs text scaffolding to explain why nanomaterials have a large surface area.

—She begins by clearly defining the term surface area, in case it’s new to her readers.

—Next, she uses an everyday example (a potato being cut into french fries) to show how surface area increases as an item (the potato) is cut into smaller and smaller pieces.

—She then forges a connection between this example and nanoparticles, which are like billions and billions of itty-bitty potato pieces.

—Finally, she describes how these billions of pieces give the nanomaterial a much greater surface area than that of a regular substance.”


Because Swanson’s precisely worded sentences build one upon another, step by step, readers feel supported as they move from one idea to the next, and ultimately, gain a clear and accurate understanding of the complex information.


To help students understand how text scaffolding works, use a document camera to display page 7 of Super Gear: Nanotechnology and Sports Team Up on the your classroom interactive whiteboard and show students the steps Jennifer Swanson uses to help readers build an understanding of why nanomaterials have a large surface area. 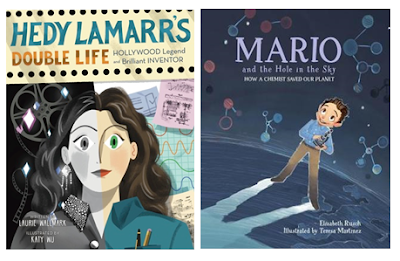 Next, divide the class into small groups and pass out copies of either expository or narrative nonfiction titles that deal with complex topics. Two of my recent favorites are Hedy Lamarr’s Double Life: Hollywood Legend and Brilliant Inventor by Laurie Wallmark and Mario and the Hole in the Sky: How a Chemist Saved Our Planet by Liz Rusch.

Encourage each team to read their book together and mark examples of text scaffolding with a sticky note. They should also make a quick note about the concept being explained. When the groups seem ready, invite the teams to share their findings with one another.
Posted by Melissa Stewart at 12:30 AM