Today we continue the Nonfiction Authors Dig Deep series with an essay by author Lesa Cline-Ransome. Thank you, Lesa.

Much of my life has been shaped by stories. From my earliest days, as a visitor to the Malden Public Library in Massachusetts, I was transformed by the stories I read.


As a young girl, so shy and nervous I was often too afraid to speak, I devoured the fictional stories of fearless girls and rabble rousers. In them, I saw a seedling of myself, waiting to take root.
Yet, while I read stories by Astrid Lindgren and Judy Blume, I avoided biographies. The often bland, didactic narratives of seemingly perfect people with perfect lives failed to resonate with me in the way that fictional characters could.

Instead of seeing inspiration and potential, I saw a failure in myself to reach the level of perfectionism required to be successful.  Where was the grit, and perseverance and fierce independence of a girl like Pippi Longstocking, orphaned, living alone, fending off all manner of danger? The divide between fiction and non-fiction was vast in my eyes, that is, until I read the story Harriet Tubman.
As the only black student in a classroom of all whites, I dreaded the time of year when slavery was discussed. The room would grow uncomfortably quiet as my classmates stole glances in my direction because they felt that somehow, those inaccurate and incomplete descriptions of enslaved persons portrayed the complete sum of my African American ancestry. In my history, they saw people too weak, too afraid, too incapable of resisting bondage.
But then, one year, we read about Harriet Tubman. Her story was like one of an action adventure hero, complete with danger, disguise, late night plots and daring escape. Because her story was also true, it was even better than Pippi Longstocking.
Harriet suffered at the hands of slave masters, was unschooled, and endured persistent health problems. She was rejected by her husband when she returned to rescue him. Yet despite these impediments, she kept right on striving.
Now this, I thought, was a real life hero.
I realized then that it wasn’t that I disliked biographies. What I disliked were the biographies I’d been handed in the past. I needed to read stories about people who looked like me. People who had persevered despite racism, loss, and adversity. 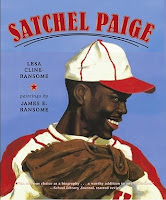 When I began writing for children, I wrote the kind of biographies I longed for as a child. My earliest books included Satchel Paige, Young Pele: Soccer’s First Star, and Major Taylor:  Champion Cyclist. You won’t find these athlete’s names in social studies textbooks, alongside names like Babe Ruth and Joe DiMaggio. Their stories of struggling to reach their potential against all odds drew me in.  Their stories are human stories of how small ripples can cause big waves in the fight for dignity and equal access.

Books like Just a Lucky So and So:  The Story of Louis Armstrong, My Story, My Dance:  Robert Battle’s Journey to Alvin Ailey and Before There was Mozart:  The Story of Joseph Boulogne Chevalier de Saint George seek to highlight the role of the African American influence on the arts. 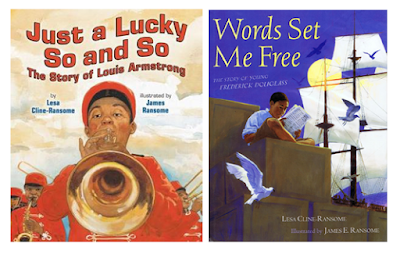 Diving further into history with the biography of Frederick Douglass in Words Set Me Free, helped me discover one young boy’s quest for dignity and freedom in the form of education. 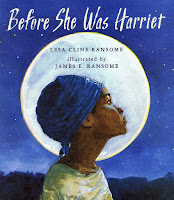 And most recently, as I told the story of Harriet Tubman in Before She was Harriet, I remembered how all those years ago, her story of courage, gave me hope that I too could one day be fearless.
These true stories reveal the crucial role of African Americans in the building of this country and how the lessons from a troubled history can provide a roadmap for a better future. They give young readers a broader understanding of our shared history, our culture, and our strengths.
I still love Pippi Longstocking, but in each of the figures I’ve written about, I found the real life stories of fearlessness I sought as a young girl. And ultimately, both off and on the page, I found my voice. 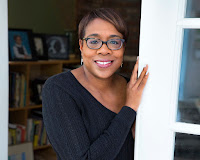 Lesa Cline-Ransome is the author of nearly twenty books for children including Friends and Foes, Light in the Darkness:  A Story of How Slaves Learned in Secret, and Freedom’s School. Before She Was Harriet received a Christopher Award, Jane Addams Award, and a Coretta Scott King Honor for Illustration. Lesa’s debut middle grade novel, Finding Langston, received the  Scott O’Dell Award for Historical Fiction and the Coretta Scott King author Honor Award. She lives with her husband and frequent collaborator, illustrator James Ransome. www.lesaclineransome.com.
Posted by Melissa Stewart at 12:30 AM