Today we continue the Nonfiction Authors Dig Deep series with an essay by author Karen Romano Young. Thank you, Karen.

Being included—being told you can do this, you can be here, you should be here—is what gets kids engaged and involved in science for now, and for life. When it comes to science, I don’t believe enough people of any age are hearing this message.

In my science writing my goal is to make kids feel invited, included, involved, and validated, no matter how inexperienced they may be.


When I was a child, my life was full of adults who let me tag along, no matter what they were doing. I followed my parents and grandparents, aunts and uncles, neighbors and friends around, watching them do things. I learned how to grow rhubarb, hang bookshelves, shop for fabric/screws/used cars/tomatoes, change the oil on a lawnmower, shuffle cards, dress a wound, cut off the circulation to a skin mole, body surf, tell if the tide was coming in or going out, plant bulbs, take off and land an airplane, build a tree house, train a dog, curl hair, scramble eggs, kill mildew, care for a stunned bird, fix my glasses, hunt for fiddlehead ferns, find secrets in a painting, saw a bottle in half, wire a lamp, and much, much, much more.
Sometimes it was boring, especially at first. I think boredom is a lack of engagement. Why wouldn’t I be engaged? Well, sometimes I felt too shaky—dumb, unskilled, or inexperienced—to try something, and the fact is, I screwed up continually. But the experts in my life (merely people who were a few steps ahead of me) helped me through my most vulnerable moments. They made being shaky okay. ﻿﻿
Through my research, participation in lab work and field work, writing and drawing, I’ve learned that my ability to mirror kids’ feelings of being dumb, disengaged/bored, or excluded—and flip them to simply being shaky because they’re new to something—is my most valuable offering.

﻿﻿
It’s the degree to which people are willing to plow past these shaky feelings that makes the difference in their success as learners—whether that person is a kid, a Ph.D. scientist, or a middle-aged author heading off to Antarctica. If the question is, “Do I belong here?” then the answer must be, “The likes of you is welcome here. Come on in.”


The answer lies in the invitation, and in the way it’s given. If I could, I’d invite every reader to personally accompany me on a science adventure. We’d talk along the way, and if we made enough mistakes, we’d find the right way.


Last March, I climbed aboard an icy boat in Antarctica to assist Pete Countway, a Bigelow Laboratory for Marine Sciences molecular biologist. Pete had offered to bring me along for two months as his lab assistant in exchange for my creating science comics about his work.


Before the trip, I must have told him six times that I didn’t know how to do lab work, had only helped with field work before, and shouldn’t be put in charge of anything important. . .


This brilliant scientist said. “It’ll be okay.”
And it was, until I turned on the water pump and flooded the lab. Sure enough, I’d screwed up. Who doesn’t know the shaky feeling I had in my stomach?


I ran to find Pete, and he apologized: it wasn’t my fault, he said; he hadn’t shown me how to empty “the pig”, a big jar into which waste water ran, so the pig (not I) had made the mess.


I was nervous all over again when we went to sea to capture water samples. I had to learn a whole new process, one involving heavy lifting, deft maneuvering, and quick thinking, aboard a pitching, freezing boat, in the snow.


the boat’s winch, which involved a sticky knob, adjustments for the height of waves, and a sharp eye on the angle of the A-frame used to lift our instruments into the Southern Ocean.
“You’re going to have to allow me a little learning curve here,” he told Andrew, who was running the boat.

Andrew laughed and shrugged. He had only just recently learned his way around the winch himself. It’s great when people can articulate their inexperience and need for a little leeway, but then jump in and try anyway.


Writing about science for children is full of moments when I think they could get the shakes—feel intimidated or uninvited—just when I most want them to be engaged, excited, and to think, “This is for me.” I want them to see their role in the science story.


When I say that feeling dumb is my superpower, that’s what I’m talking about. I try to channel my own sense of inadequacy or ignorance and to share what’s useful and essential about those feelings, to set an example of how to deal with them, for kids.


I believe that kids are born curious, born wanting to see and know and do. When they read about smart scientists or foolish artists having adventures, it’s the same as watching a parent or friend do a task: they want to learn how and to be involved.


They must not be shooed away by feeling dumb or shaky because they don’t see how to get where they want to go. The message must always be: you are fine, you are wanted, I’ll show you the way. 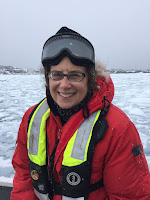 Karen Romano Young is the author of more than 20 nonfiction books for children, and the creator of #AntarcticLog, a science comic about exploration and research. Her most recent books are the acclaimed WHALE QUEST and SHARK QUEST (Twenty-First Century Books, 2017 and 2018). Coming next is a graphic nonfiction book, DIVING FOR DEEP-SEA DRAGONS (Chronicle, 2020). For more science comics, visit www.antarcticlog.com or follow AntarcticLog on Instagram.
Posted by Melissa Stewart at 12:30 AM