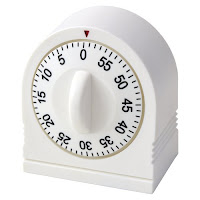 Last summer, authors Linda Sue Park and Laurie Halse Anderson introduced me to the idea of writing sprints—timed writing sessions with short breaks in between.

Some people say 25 minutes is the ideal length of a writing sprint, but Linda Sue prefers 12 minute blocks.


In October, I decided to try this technique with students during a school visit. At the school’s request, I met with fifteen motivated fourth and fifth graders. They wrote on Chromebooks, and I wrote on my laptop, which was hooked up to the classroom Smartboard. We did two 15-minute writing sessions with 10-minute breaks. During the breaks, we discussed the aspects of nonfiction writing we were struggling with right now.


I was delighted with the quality of the conversations we had. One fourth grader was struggling to come up with the perfect wording to describe something. It turns out, she had never heard of a thesaurus. As I demonstrated how to access and use online thesauruses, the teacher ran to the resource room and returned with a half dozen print copies. 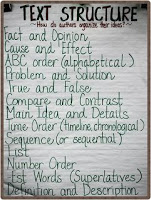 A fifth grader was grappling with text structure. She was using a compare and contrast structure, but it wasn’t working as well as she had hoped. I happened to have a draft of a manuscript with an “opposites” text structure on my computer, so I pulled it up and we talked about how the five basic structures most students learn are just the tip of the iceberg.


Instead of forcing the compare and contrast structure, I suggested that the student might want to invent a structure that was perfectly suited to her needs. Then we talked about how she could do that by looking at the information she wanted to share to see if there were patterns. Grouping the information might show her how it could fit together and what the order should be.


I loved how the students and I were interacting like colleagues. I wanted them to know that even though I may have more writing experience than they do, I still face obstacles. Every writer does. For me, finding the best way to share information I care about is like doing a jigsaw puzzle. It’s a fun challenge.


In March, I tried writing sprints again. This time I wanted to work with a single grade level and try a classroom of students. Smaller groups have a lot of advantages, but there’s a certain cohesiveness to a classroom group that I thought might be beneficial. 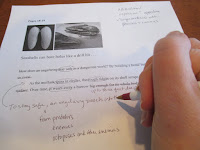 Once again, the students were really engaged, and they had terrific questions and comments. During the breaks, we discussed ways to make revision more manageable, such as taking multiple sweeps through a manuscript, each time focusing on a different element. I was able to show them several drafts of a manuscript, so they could see how much it changed over time.


Next, I’d like to experiment with doing writing sprints via Skype. I think this could be especially useful because informational writing is often taught in the winter, when weather can make travel difficult. Because I can show students my computer monitor via Skype, this technique may work well both virtually and in person.
Posted by Melissa Stewart at 12:30 AM