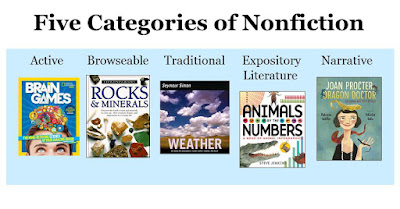 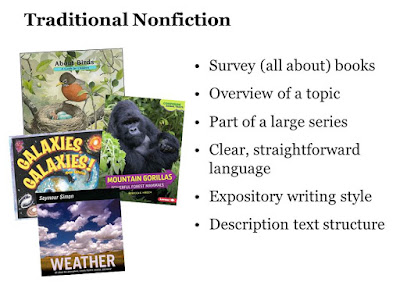 Traditional NonfictionAbout Fish: A Guide for Children by Catherine Sill and John Sill 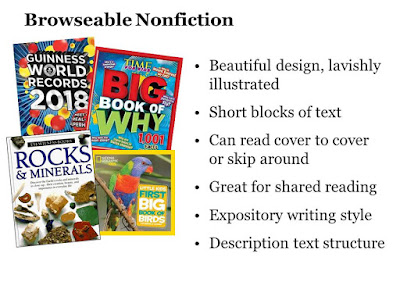 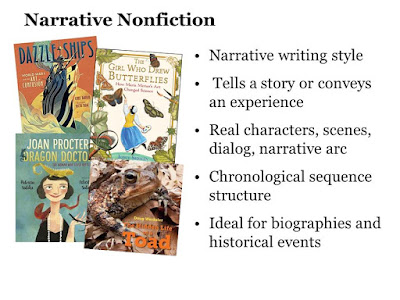 Narrative Nonfiction
Dazzle Ships: World War I and the Art of Confusion by Chris Barton and Victo Ngai


The World Is Not a Rectangle: A Portrait of Architect Zaha Hadid by Jeanette Winter


Vincent and Theo: The Van Gogh Brothers by Deborah Heiligman 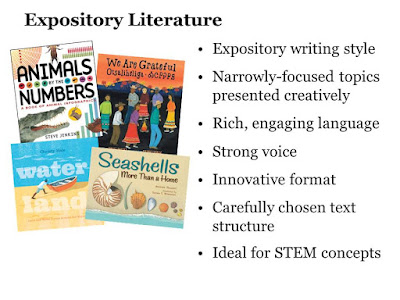 
Look at Me! How to Attract Attention in the Animal World by Steve Jenkins and Robin Page


A Beetle Is Shy by Dianna Aston Hutts and Sylvia Long 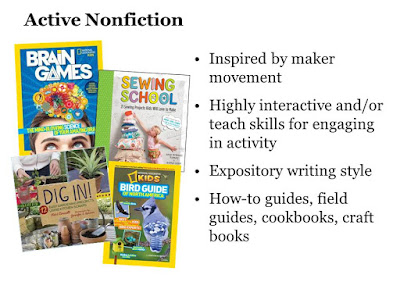 
Minecraft: Guide to Exploration by Mojang Ab and the Official Minecraft Team

Try This Extreme: 50 Fun & Safe Experiments for the Mad Scientist in You by  Karen Romano Young 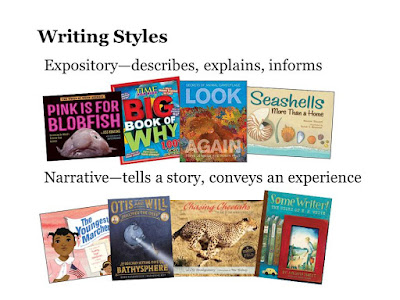 Ballet for Martha by Jan Greenberg and Sandra Jordan


Time for Kids Big Book of Why 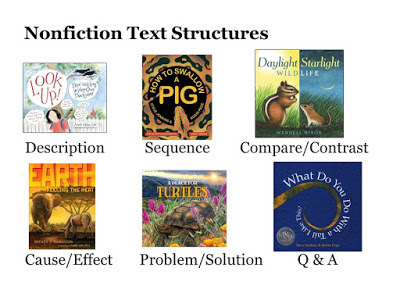 
The Beetle Book by Steve Jenkins


Creep and Flutter by Jim Arnosky


Pop: The Invention of Bubble Gum by Megan McCarthy


Journey narrative
If Stones Could Speak by Marc Aronson


Lost Treasure of the Inca by Peter Lourie


Quest for the Tree Kangaroo by Sy Montgomery


Saving the Ghost of the Mountain by Sy Montgomery


Titanic: Voices from the Disaster by Deborah Hopkinson


We’ve Got a Job by Cynthia Levinson


Cycle narrative
A Drop of Water by Gordon Morrison


Poop Happened!: A History of the World from the Bottom Up by Sarah Albee


How to Swallow a Pig by Steve Jenkins and Robin Page


The Klutz Book of Paper Airplanes by Doug Stillinger


Try This! 50 Fun Experiments for the Mad Scientist in You by Karen Romano Young


Compare & Contrast
Dueling spreads
Frog or Toad? How Do You Know? by Melissa Stewart

Born in the Wild by Lita Judge


Cause & Effect
Earth: Feeling the Heat by Brenda Z. Guiberson


What Do You Do with a Tail Like This? by Steve Jenkins & Robin Page
Posted by Melissa Stewart at 12:30 AM