Q & A with Sara Levine: Writing Flower Talk: How Plants Use Color to Communicate 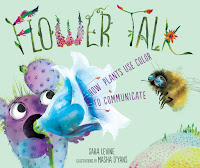 In this fascinating interview, award-winning author Sara Levine shares some of the surprising strategies she used in crafting her new picture book about how plants send messages to animals.


MS: Your previous books have focused on the comparative anatomy of bones and teeth. Why did you decide to write about plants?


SL: The idea Flower Talk came from a paragraph in a textbook I’d inherited for a college course on introductory biology. It detailed how specific colors of flowers attract specific pollinators—information that was new and fascinating to me, and, later, equally fascinating to my college students. I thought young readers would be interested too.


MS: Your previous books employ a combination of second- and third-person narration, which is quite common for expository nonfiction picture books. Why did you decide to write this book from a plant’s point of view?


My original draft also had a third-person point of view. My editor at Millbrook Press, Carol Hinz, found the topic interesting, and she was intrigued that it covered material previously unpublished for kids. But she thought my writing lacked the playfulness and humor of my previous books.


She made a surprising suggestion. “It might be going too far to propose that a flower narrate the book,” she said, “but I’m going to throw that out as one possibility just to see if it leads you to any other interesting approaches.”


It occurred to me that a plant communicating with animals to get its needs met (i.e., its pollen moved efficiently) wouldn’t want to waste its time explaining to humans how this works. So I made my narrator cranky—“Go take a hike. I’m pretty busy in case you haven’t noticed.”—but in the best way. I modeled him after some of my favorite older relatives from Brooklyn—cantankerous, funny, slightly off-color and loving. He’s sort of like Oscar the Grouch.


MS: What were some of the advantages of having a cranky plant as a narrator?

SL: It allowed me to include a lot of humor. For example, the narrator (whom illustrator Masha d’Yans aptly chose to portray as a prickly pear cactus) tells his human readers about all the false and human-centric ideas we have about flower colors, and then comments, “What a load of fertilizer!”  That’s probably my favorite line in the book.


I hope readers learn something new about the relationship between plants and animals from this book, and I hope that they find it entertaining as well.

MS: Like your earlier books, this one has an expository writing style. It provides an explanation rather than telling a story. Do you consider it fiction or nonfiction?


The book is nonfiction in that it contains real-life information based on research. But it is told from the point of view of a plant, and, as far as we know, plants don't talk to us--at least not this directly, or with Brooklyn accents. So, it uses a fictional device.


Some people characterize books like this, books with true information relayed by non-human narrators, as "informational fiction." I don't know that it's so important to put the book into a category. What is important to me is that readers recognize that the information given is factual. Hopefully, this will be evident by the way the book is written and presented. 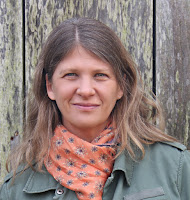 Sara Levine is an educator, veterinarian, and award-winning author of seven published or upcoming science books for children. Her honors include the AAAS/Subaru SB&F Prize, Utah Beehive Book Award, Cook Prize finalist, Monarch Award master list, and Bank Street College Best Children's Book of the Year. Learn more at http://www.saralevinebooks.com or follow her @saraclevine
Posted by Melissa Stewart at 12:30 AM