How Understanding Text Structures Has Helped My Writing 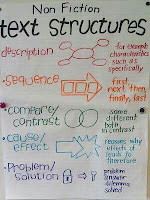 Recently, I wrote an article for Bookology about the writing process as a living story. And that got me thinking about this blog. I began posting, three days a week, in 2009. That’s 10 years ago!


In many ways, it’s a living story too. It’s ongoing, and I have no plans to stop posting anytime soon. If anyone was crazy enough to read it all the way through, they’d see how my thinking about nonfiction for children, especially nonfiction science writing, has evolved over time.


A quick search of the archive shows that one of the topics I’ve discussed most on this blog is text structure. Those posts date back all the way to 2009. Back then, I was just shooting in the dark. I knew structure was a critical element in nonfiction writing, but I didn’t really know how to think about it or talk about it in a meaningful way.


My first meaty posts on the topic were in Fall 2013, and they were explorations of the grade 3 and 4 Common Core ELA standards about text structure. To say that Common Core changed and expanded my thinking about nonfiction craft would be an understatement. Suddenly, it gave me terminology to discuss the challenges I was facing in my writing. It also gave me a cadre of tools for my writer’s tool box.


So while I’m certainly no fan of standardized testing, I LOVE the standards themselves. They’ve taught me so much about what makes a nonfiction manuscript outstanding.


And while I was sorry to see Common Core go the way of the dinosaurs, I’m delighted that—just like modern birds—something important remains. As we return to a system in which each state designs and follows its own set of standards, I’m thrilled to see most states holding onto many of the ideas from Common Core, especially those related to nonfiction reading and writing.


Thanks to Common Core, whenever I start thinking about a new book, I have five text structures to try on for size, and if none of them seems quite right, I’m now more confident about inventing a new text structure that’s a perfect fit for the information I want to share and the way I want to present it. 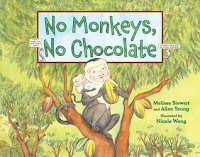 Because I’m no longer shooting in the dark, my writing process is so, so, SO much more efficient than it was in the past. While it took me 6 years to figure out how to write No Monkeys, No Chocolate in a way that would engage young readers, I recently sold a manuscript that took less than a year to write. I also have other manuscripts that are coming along nicely, so I know the less-than-a-year manuscript wasn’t a total fluke.


I think that if upper elementary and middle school students are encouraged to explore and experiment with various text structures, as I discuss here, by the time they reach high school, they can reap the same kind of benefits that I have.
Posted by Melissa Stewart at 12:30 AM