Today we continue the Nonfiction Authors Dig Deep series with an essay by author Pamela S. Turner. Thank you, Pam.

My first memory: reaching through the wooden bars of a playpen, trying to drag a puppy in by his ears. Although my dog-handling skills have improved, I'm still drawn to animals in a way I can't fully explain. Perhaps it's their otherness, the presence of a gulf that seems almost crossable but isn't.


As writers, our subjects often define us. I never get tired of exploring the complex, contradictory, and continually fascinating relationship we humans have with other animals. 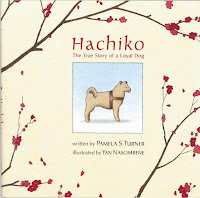 When casting about for a subject for my first children's book I thought: Dog stories! I love dog stories! The result was Hachiko: The True Story of a Loyal Dog, a fictionalized account of a tale I discovered while living in Tokyo. (Warning: you might want to have Kleenex nearby).


The dog was the first species domesticated and is still probably our best-beloved. Our relationship with wild animals, however, is the one I've grown most committed to probing. 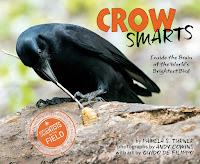 In my most recent book, Crow Smarts: Inside the Brain of the World's Brightest Bird I wanted to help readers appreciate a much-maligned, underappreciated group of animals that combine astonishing intelligence and solid family values.


New Caledonian crows, the academic stars crow family, make and use multiple kinds of tools and on some cognitive tasks can outperform six-year-old children. This is striking evidence of convergent evolution: two groups of animals that have gone down different paths but arrived at a similar destination.


Crow Smarts was a very personal book for me because I volunteer as a wildlife rehabilitator specializing in crows and ravens. At the moment, in fact, I have a juvenile crow recuperating in my aviary after being trapped in a chimney for a week and losing about half its body weight. I have no idea how this crow got into the chimney, but intelligent animals are sometimes too curious for their own good! 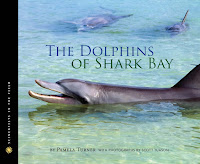 Many animals, like crows, are in dire need of good PR. But a few are in need of corrective PR. I wrote The Dolphins of Shark Bay in order to smash a few myths about bottlenose dolphins, probably the most popular wild animal species on the planet. They perform amazing tricks! They play with swimmers! They save drowning people!--etc. etc.


In Dolphins of Shark Bay, I sought to show that their relationships with each other are far richer, more complex, and more interesting than their relationship with us. We don't need to turn dolphins into noble elves in wetsuits because these animals are astonishing enough on their own. (And by the way, as a scuba diver who has been on dives involving both sharks and dolphins...I always assume Flipper's got other priorities.)


I hope to continue writing books for children and young adults that strive to educate, enlighten, and entertain by putting animals in a realistic behavioral and environmental context. I hope that by doing so I'm also placing humans in a realistic context.


The famous environmentalist and myrmecologist E.O. Wilson put it best:
"The more we know of other forms of life, the more we enjoy and respect ourselves. Humanity is exalted not because we are so far above other living creatures, but because knowing them well elevates the very concept of life."

Pamela S. Turner was an international health consultant and health policy researcher before turning to writing about science and history for children and young adults. She has lived in Kenya, South Africa, the Marshall Islands, the Philippines, and Japan. Each of her three children was born in a different country.


Pamela's books, including Hachiko, Gorilla Doctors, The Dolphins of Shark Bay, A Life in the Wild, The Frog Scientist, and Crow Smarts, have won such honors as the Society of Children's Book Writers and Illustrator's Golden Kite Award, the American Association for the Advancement of Science (AAAS) Science Writing Prize, and an Orbis Pictus Honor. Her most recent book, Samurai Rising: The Epic Life of Minamoto Yoshitsune  is an ALA Notable Book, a YALSA Excellence in Nonfiction Award Finalist, and was named a "Best of the Year" by Kirkus, Booklist, and School Library Journal. Pamela lives in Oakland, California. www.pamelasturner.com.
Posted by Melissa Stewart at 12:30 AM