Today we continue the Nonfiction Authors Dig Deep series with an essay by author Laurie Wallmark. Thank you, Laurie.

Writers are often told to write what they know. As far as I’m concerned, we should write what we’re passionate about. We can always research (and who doesn’t like research?) a topic, but if we’re not interested in it—boring!


Which brings me to why I write about women in STEM (science, technology, engineering, math). Doing so lets me combine two of my passions—STEM and equal opportunity for all.


Ever since I was a little girl, I’ve loved science and math. In college, I majored in biochemistry, which allowed me to take courses in math, physics, biology, chemistry, and of course, biochemistry. I was in science-nerd heaven.


I also took a few computer courses (there wasn’t yet a computer science major) and found a new love—programming. But how could I combine my new and old loves? Much to my delight, I found out there was a profession called scientific programming. Woo-hoo!


After college, I received a master’s degree in Information Systems and worked in programming for many years. Now I teach computer science at my local community college.


But what about my other passion, wanting to provide equal opportunities for everyone, regardless of sex, race, religion, sexual orientation, etc.? As a child, I was convinced I could only become a scientist if changed my name to Marie Curie. After all, she was the only woman scientist I had ever read about. Through my writing, I can show girls (and boys!) that STEM is for everyone.


There are so many unsung women in STEM whose stories deserve to be told. How do I decide which ones to write about it?


Since I’m a computer scientist, who better to write about than Ada Byron Lovelace—the world’s first computer programmer? Notice, I didn’t say the first woman programmer. Ada was the first person, male or female, to write code for a computer.

At the time I started doing research for the book (about 2007 or so), no one, other than a few other computer geeks like me, had ever heard of her accomplishments. I’m happy that my book, ADA BYRON LOVELACE AND THE THINKING MACHINE (Creston, 2015), has played a part in changing that.

You can tell by the title of my next book, GRACE HOPPER: QUEEN OF COMPUTER CODE (Sterling, 2017), that I still had more to say about women and computers. Grace was the first person (again, not the first woman) to use words, instead of just “1”s and “0”s, to write computer code. This made it possible for non-technical people (like kids!) to program them. 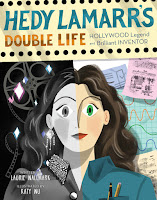 For my third book, HEDY LAMARR’S DOUBLE LIFE (Sterling, 2019), I decided it was time to consider women other than computer scientists. Hedy was a glamorous movie star AND she co-invented the technology that helps keep Wi-Fi, GPS, and Bluetooth from being hacked. I was drawn to Hedy’s story because it shows kids they don’t have to give up their other interests to be good at STEM.


I love bringing to life stories about women in STEM. The book I’m working on right now is a woman mathematician. Will I ever write biographies of men or people not in STEM? Who knows? But I do know, my books will always be about someone whose accomplishments have been overlooked—someone whose story deserves to be told.

Award-winning author Laurie Wallmark’s debut, ADA BYRON LOVELACE AND THE THINKING MACHINE (Creston, 2015), received four starred reviews and many national awards. GRACE HOPPER: QUEEN OF COMPUTER CODE (Sterling, 2017), earned a Kirkus star and made several “best of” lists. Her next book, HEDY LAMARR’S DOUBLE LIFE (Sterling), releases in 2019. Laurie has an MFA from VCFA and teaches computer science. Find Laurie at www.lauriewallmark.com and @lauriewallmark.
Posted by Melissa Stewart at 12:30 AM