I have a secret to share, and it’s the reason why I write nonfiction. I want to know what makes people afraid. More importantly, I want to know why, despite extreme fear that may include the possibility of death—they face that fear and go on to lead brave lives.


I’ve come to realize that this motive is personal—that I’m looking for a blueprint on life in the hopes that I haven’t strayed and that I can become the best human being I can be. (Even though there’s this fear inside me that I might fail.)


This obsession began when I realized that my family background involved trauma and some of the worst kinds of fear. Some of my relatives never recovered from this past. Others—despite carrying emotional scar tissue—went on to lead fulfilling and brave lives.


In researching Babe, I learned about her detractors—including male sports reporters who didn’t believe that women should compete in track and field.
Those sexist views churned up the anxiety and vulnerability I’d felt as an ESPN sportscaster in the 1990s when my male colleagues didn’t believe that a woman should report on the NFL, the NBA or the NHL. They did everything possible to silence my voice in hopes that I would quit. I didn’t.


Neither did Babe. Seeking Babe’s own voice in the personal letters she wrote throughout her career, I discovered her vulnerabilities and her courage. I was able to channel my own vulnerability into the narrative. 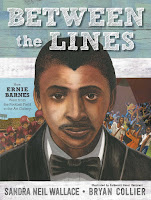 BETWEEN THE LINES: How ERNIE BARNES Went from the Football Field to the Art Gallery (Simon & Schuster/Paula Wiseman Books, 2018)
Choosing a subject for my first picture book biography was easy. I’d learned of Ernie Barnes while working as a sports announcer. I never forgot his unwavering self-confidence in the face of adversity, his strength in maintaining his identity as an artist while playing in the NFL, and his resourcefulness in navigating both worlds, refusing to adhere to stereotypes.


Years after leaving ESPN, when I read that he had died, my heart sank. Why hadn’t I written about him right away? The truth was, I didn’t know if I was “visual” enough to write in the picture book biography format. Instead, I spent years crafting long-form nonfiction with book lengths ranging up to 352 pages.


But when I stumbled on an article about Ernie’s artwork from the Los Angeles Olympic Games, I knew I had to write his story. This time, my nonfiction backlist gave me the courage to try the picture book biography format. And I soon realized that broadcast journalism nurtured in me a deeply visual sense mechanism. I think in pictures and scenes, much like a cinematographer.


Ernie thought in pictures, too. He saw life as a canvas in motion connecting humanity. I see story as a propulsion of bold, litmus-test moments spiraling toward truth. Picture book biographies resonate with me because they form an immediate connection with the subject’s soul. Writing them can often consume as much time as lengthier nonfiction, because each word in a picture book is weighted as heavily as an entire sentence or paragraph in long-form nonfiction. 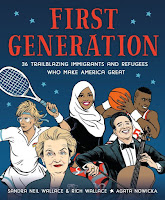 
The jumping-off point was my own journey toward citizenship in 2016 and the ostracization of so many immigrants and refugees with whom I took the oath during our swearing-in ceremony. I wanted their stories to be front and center, but I also needed to examine my own feelings around citizenship, being first generation, and the daughter of a refugee and concentration camp survivor from the former Yugoslavia.


I knew right away what emotions and experiences to look for in researching our subjects, so for this book, curating was in my DNA. Yet, being a collective biography, we needed to achieve the heft of story through brevity and in what I call, bio-sketches.


To get at the core of the story, our mission statement revolved around one simple question: If we’re in a cafeteria sitting next to an eleven-year-old, what is it about the person we’re writing about that the child will never forget?


A powerful and unexpected research tool became photographs. My mother cherishes the few images that my grandmother brought with them on their boat journey from Europe, and we discovered the same attachment with many of our subjects. So, we selected for each person two moments in time or two images—like on Instagram—that defined their lives, which I talked about in an interview with School Library Journal.


Growing up, I didn’t talk very much about my family’s traumatic past. The truth is, the laughter from my classmates, when they heard my relatives speak English with heavy accents, stung—a lot.
Today, it’s a privilege to shine a light on the truth and on my life. I know that I am who I am because of the strength and perseverance of my relatives and their unwavering will to survive. Ultimately, First Generation lets immigrant kids know that they are valued and appreciated. For kids whose families have been here for a long time, it helps forge connections by seeing how much we have in common, like the need to be safe, to belong, and to be loved.


Nonfiction takes courage, honesty, transparency, and a tenacity to uncover the truth. There is no hiding behind a subject. We dig deep into research and our souls and present true stories to the most valued audience on the planet: young readers.


Sandra Neil Wallace grew up in a home where several languages were spoken, so oral storytelling became a tradition and perhaps the reason she became obsessed with interviewing people and writing down their stories. Her nonfiction books for young readers span all ages and focus on people who break barriers and change the world. As the daughter of a refugee and concentration camp survivor, Sandra was the first generation in her family to attend university. She became a reporter, anchoring the network news before shattering the glass ceiling in sports television as the first woman to host an NHL broadcast on national TV.
Sandra’s nonfiction titles have been selected as an NCTE Orbis Pictus winner, ALA Notable Books, the Chicago Public Library's "Best of the Best", Booklist's Editors' Choice, and Bank Street College's Best Children’s Books of the Year. She became a U.S. citizen in 2016 and advocates for social responsibility as a member of the Keene Immigrant and Refugee Partnership and advisor to the Cohen Center for Holocaust and Genocide Studies at Keene State College. She lives in New Hampshire and Maine with her husband, author Rich Wallace.
Posted by Melissa Stewart at 12:30 AM