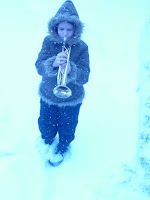 When my daughter was ten, I brought home an award-winning documentary about a high school jazz band competition. My daughter played trumpet, and I thought she’d be inspired seeing older students play. Instead, I watched her face fall as we both slowly realized that the filmmakers had totally excluded girls. Only boys were interviewed; when a band played, the camera cut away from girls and focused on the boys. In our town, school bands had at least as many girls as boys. But in this film, girls who played jazz simply did not exist. 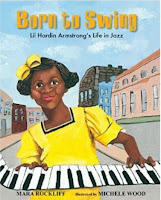 That film failed to inspire my daughter, but it did inspire me—to dig into jazz history and write Born to Swing: Lil Hardin Armstrong’s Life in Jazz (illustrated by Michele Wood, Calkins Creek, 2018).


Lil was an amazing pioneer. At a time when jazz bands only hired women as “canaries” (singers), she pounded the piano for the hottest jazz band in Chicago. She was a composer, too, who wrote and arranged hit songs like “Brown Gal” and “Just for a Thrill.” And it was Lil’s sophistication, influence, and drive that turned her husband, Louis Armstrong, from an unknown trumpet player into a legend of jazz.


The musicians who played with Lil (and for her—she was a bandleader, too!) spoke of her with admiration and respect. But when the history of jazz was written, Lil became a footnote to her famous husband. No one seemed to care about her own remarkable career.


Our kids need Lil Hardin Armstrong. Girls learning to play an instrument need to know that they belong, that they’ve always belonged, that before there was a Miles or a Charlie or a Dizzy, there was Lil. And boys need to know, too, so they don’t grow into men who make a movie that erases girls. 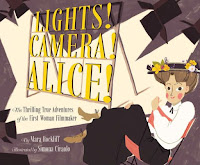 
Alice was not only the first woman filmmaker, but one of the very first filmmakers, period. Decades before the first Hollywood talkies and Technicolor, she made movies that had sound and color, as well as special effects.


To make her movies more exciting, Alice would blow up a pirate ship or crawl into a cage with a tiger. She convinced her actresses to jump from bridges onto moving trains. She tied up an actor, smeared the ropes with food, and sent in live rats to gnaw him free.


Alice Guy Blaché was a celebrity. But once again, when the first film histories were written, Alice’s name disappeared. Credit for her films went to her male assistants, or even to men she’d never met, men who had never directed a film. Our kids need Alice Guy Blaché because, for every woman directing a major feature film in Hollywood, there are TWENTY-TWO men. 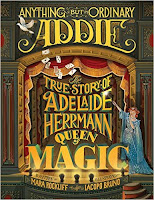 
Like Lil and Alice, she was strong, hardworking, capable, adventurous, fun-loving, and full of personality. (Unlike them, she could make candies rain down from the sky and catch a fired bullet on a china plate.) Addie made it to the top, even though she had to do it, as they say, “backward and in high heels.” Our kids need Addie Herrmann because women stage magicians are still a tiny minority, even though learning to do magic tricks is something girls love just as much as boys.


We can tell our kids, “Girls can do anything!” but we also need to show them how much women have already done. Children who love movies, music, and magic need heroines like Alice, Lil, and Addie, because when women are written out of history, we’re written out of the present and future too. That’s why I’m passionate about writing them back in. 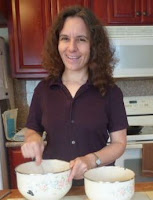 Mara Rockliff is the author of many lively historical picture books (even some about men!), including Cook Prize winner Mesmerized: How Ben Franklin Solved a Mystery that Baffled All of France (illustrated by Iacopo Bruno, Candlewick, 2015). Here she is baking gingerbread for her book Gingerbread for Liberty! How a German Baker Helped Win the American Revolution (illustrated by Vincent X. Kirsch, Houghton Mifflin, 2015). She lives in Lancaster, Pennsylvania, and online at mararockliff.com.
Posted by Melissa Stewart at 12:30 AM