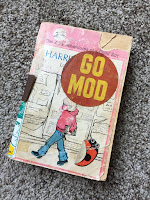 Starting in third grade and for years beyond, my favorite book—hands down—was HARRIET THE SPY by Louise Fitzhugh. The book’s characters seemed so vivid and original. It really was unlike anything else I’d ever read, and I read it obsessively (so often, in fact, that I had to use stickers and duct tape on the book’s spine to keep my copy from falling apart.)


By the time I was a teen, I was an avid people watcher. I also got very involved in community and high school theater. And if you think about it, what else is theater but people-watching?


I’m fascinated by people’s experiences, the choices they make, what their passions are, and how they choose to pursue them.


It’s not really surprising to me that I’d be drawn to writing biographies. Early in the research process, I try to figure out: What is important to this person? How does it shape their life? And, through learning about them, what can we learn about life’s possibilities?

A HOME FOR MR. EMERSON
Ralph Waldo Emerson spent his life building community, and in his hour of need, his friends and neighbors came to his aid.


THOSE REBELS, JOHN AND TOM
John Adams and Thomas Jefferson had different values, lifestyles, and personalities, but they came together and cooperated for the good of the country.


THE EXTRAORDINARY MARK TWAIN (ACCORDING TO SUSY)
Susy Clemens was determined to write a biography of her father that would set the record straight. 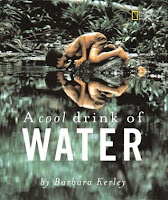 I see my fascination with people in full force in my expository writing, as well. I write concept books with National Geographic, and each book explores a theme. My first book with Nat Geo was A COOL DRINK OF WATER, and it was inspired by my two years’ in the Peace Corps, from 1981-1983. I taught math, science, and English in a tiny town, one day’s walk up the hill on a dirt road. In my town, the houses had thatched roofs, no electricity, and no running water.


And it was the fact that I had to walk with my jug down to the community water tap every day and carry my water home that led, many years later, to my book about water. I was back home in the U.S., reading an issue of National Geographic magazine, when I turned the page and saw a photograph of two women in India, carrying brass water pots on their heads. They looked so strong and yet so graceful. As soon as I saw the photo, I thought: I want to write about water, not just in Nepal but around the world. And happily, the photo that made me want to write the book is in the book.


Again, instead of thinking in general terms, I try to create a statement that gives the text a clear focus—what, specifically, do I want to say about this topic? 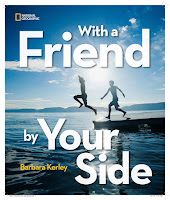 WITH A FRIEND BY YOUR SIDE
Reach out to others, for life is better with friends.

A COOL DRINK OF WATER
In different ways around the world, we all drink water.


A LITTLE PEACE
Each of us can do small things to make the world more peaceful.


My books have covered a huge range of topics, but at the core, they really have all been about people. Endlessly fascinating—especially, to me. 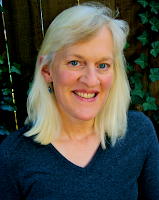 Barbara Kerley is the award-winning author of nonfiction and fiction for kids, including her latest book, the middle grade novel, FOLLOWING BAXTER. Her biographies include TIGERS AND TEA WITH TOPPY (October, 2018); THE DINOSAURS OF WATERHOUSE HAWKINS; and WHAT TO DO ABOUT ALICE? Her concept books, illustrated with National Geographic photographs, include BRAVE LIKE ME; ONE WORLD, ONE DAY; and THE WORLD IS WAITING FOR YOU. She lives in Portland, OR. Visit her website at www.barbarakerley.com
Posted by Melissa Stewart at 12:30 AM