What Is Literary Nonfiction?

Over the summer, I shared the Nonfiction Family Tree at conferences for writers and educators, and one question came up again and again: “What is literary nonfiction?”


According to children’s (and adult) book publishers, there are two broad categories of the nonfiction market:

1. commercial nonfiction, which has mass appeal. These books sell well in mass market outlets (like Target and Walmart) and bookstores with a bit of crossover to schools and libraries.

2. literary nonfiction, which wins awards and is considered higher-quality writing. These books sell primarily to schools and libraries with some crossover to bookstores and occasionally mass market outlets. 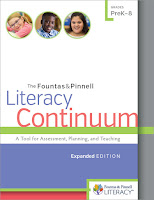 When educators use the term “literary nonfiction,” they are (understandably) thinking more about craft moves than sales potential. According to The Fountas and Pinnell Literacy Continuum (Heinemann, 2016), literary nonfiction is “a nonfiction text that employs literary techniques, such as figurative language, to present information in engaging ways.”


Because nearly all current state ELA standards are heavily modeled after the Common Core State Standards (even in states that never adopted CCSS), it’s worth looking at that document too. It focuses more on types or forms of writing and lists the following as examples of literary nonfiction:
—some personal essays and speeches
—most biographies/autobiographies
—memoirs
—narrative nonfiction
—some poetry
—some informational picture books 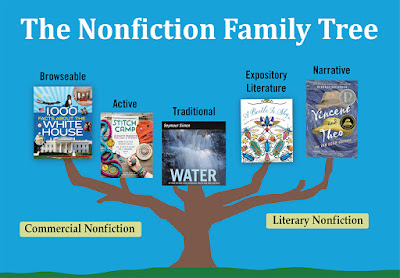 As I was creating the Nonfiction Family Tree (which focuses on children’s nonfiction books exclusively and doesn’t include essays, speeches, letters, journals, textbooks, brochures, catalogs, etc.), one of my goals was to help publishers and educators learn to speak a common language, so that publishers can better understand the kinds of nonfiction books that ALL students want and need.


So my use of “literary nonfiction” accommodates all the definitions. It includes finely-crafted texts that tend to win awards, sell best to schools and libraries, and make ideal mentor texts. It may be narrative nonfiction, including many kinds of life stories (biographies/autobiographies/memoirs); poetry; or expository/informational books with a strong voice, innovative format and text structure, and rich, engaging language. 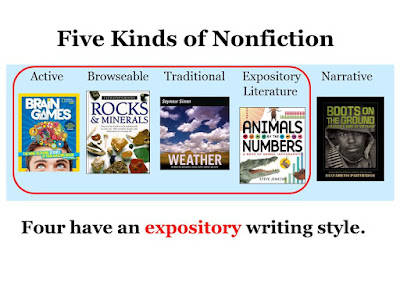 My other goals in creating the Nonfiction Family Tree were to showcase how diverse expository nonfiction is and emphasize how important it is to develop school and classroom libraries that include a diverse array of nonfiction books from all five categories. I’ll share more specifics about that on Friday.
Posted by Melissa Stewart at 12:30 AM