In this fascinating interview, award-winning author Deborah Hopkinson shares some of the strategies she used in crafting her wonderful new narrative nonfiction book, D-Day: The World War II Invasion that Changed History.


MS: You’ve written about World War II before. Was there a particular reason you decided to write about D-Day?

DH: At author visits, I like to ask students what they want to read about. D-Day was at the top of the list of suggestions. It’s not the first time readers have steered me to a subject: they helped me choose Titanic too. Another topic they’ve suggested is the Black Death, which I’ll be working on next year. I can’t wait: I know virtually nothing about the Middle Ages.


I guess some people find this odd, but I once attended a lecture by David McCullough. He said his academic friends always tease him about taking on subjects he knows nothing about. But that’s what motivates me. I love exploring and learning new things.
MS: D-Day begins like a novel. Before the Table of Contents, there’s a short section about a paratrooper being dropped at night. Why did you choose to start this way? DH: The invasion of Normandy was an incredible feat of planning and organization. I want readers to appreciate the vast scope, but also realize that it was experienced by individuals.  Beginning with David Kenyon Webster’s incredible story helps, I hope, to bring the reader directly into the event and the emotions of young soldiers, many of whom were facing combat for the first time.


Of course, I also hope this will help “hook” readers who may not normally pick up nonfiction. And, thanks to the generosity of David Kenyon Webster’s family in allowing me to quote from his book, Parachute Infantry: An American Paratrooper’s Memoir of D-Day and the Fall of the Third Reich, we get to know him as a character. In later sections, we follow his preparations for this moment, and then what happened after he landed behind Utah Beach in the darkness.

MS: D-Day includes a number of breakout sections. What purpose do they serve?

DH: I think of narrative nonfiction as operating on different levels. It’s almost as if you’re canoeing on a river. There’s the main narrative flow, and then there are little side inlets you can take to explore the banks.

In D-Day, breakouts called Dispatches include a variety of first-person accounts, from a Frenchwomen, to a Panzer commander, to an African American steward on a landing craft.  Reader’s Invasion Briefings provide historical context such as background on World War II and the strategy behind the invasion plans.


MS: Your books are known for having a lot of back matter. Do you read back matter yourself?

DH: I love back matter, and I’m always encouraging students to read source notes. But since I’m well aware not everyone shares my passion, lately I’ve been trying to find ways to move it into the main narrative. In D-Day, although there are Internet resources and links to museums or audio first-person accounts in the back, we’ve also included these links as snippets in the text called Look, Listen, Remember.

I also like to have fun with back matter. In DIVE! we called it the “After Section,” playing with the idea that the book was like a submarine. In D-Day, it’s called the “Quartermaster’s Department.”
MS: There were two U.S. landing beaches, Utah and Omaha, which form the core of your book. Why did you approach the story of each beach in a different way?


DH: Paratroopers were dropped inland behind Utah Beach in the early morning darkness of June 6. Many soldiers wandered alone, disoriented, trying to find their units, and so my narrative follows their experience.


The beach landings at Omaha were plagued by problems. Here, to try to convey the chaos and confusion, I employed a cinematic technique by starting not with just one soldier, but a myriad of voices recounting those harrowing, deadly landings.


MS: What do you hope readers will take away from the experience of reading D-Day: The World War II Invasion that Changed History?


DH: There’s no way that any one book can capture an event like D-Day. I think of my book as an introduction to a lifetime of reading.


I’ve met young readers who know more than I ever will about World War II. I just hope I don’t disappoint them. 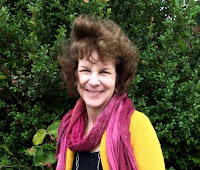 Deborah Hopkinson’s new books include D-Day: The World War II Invasion that Changed History, Under the Bodhi Tree: A Story of the Buddha, Carter Reads the Newspaper, and How I Became a Spy, A Mystery of World War II London. You can follow her online at www.deborahhopkinson.com and  @deborahopkinson.

Email ThisBlogThis!Share to TwitterShare to FacebookShare to Pinterest
Labels: Behind the Books, Narrative Nonfiction, Writing Nonfiction