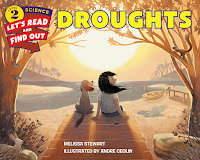 Welcome to the world!

When I began writing Droughts in early 2015, I thought:

"This book will be great for kids in the Western U.S. Drought is a big problem there."

But by the time I reviewed the sketches by Andre Ceolin in May 2016, there were hints that climate change was about to make drought a problem in other sections of the country too.
In July, officials in my small Massachusetts town announced a ban on all outdoor watering. As the weeks passed, soil dried out. Plants turned brown. Large tree branches started to sag. It was hard to believe.

As I reviewed the final art in October 2016, drought was affecting towns and cities in New Hampshire, Maine, New York, Georgia, Mississippi, Louisiana, Tennessee, South Carolina, and more. It was unprecedented.
This summer couldn't be more different from last year where I live. It's cool and rainy. I'm grateful because the trees need time to recover. But I know that as Earth's continues to heat up, extreme weather is going to become more and more common. There will be more droughts and floods, hurricanes and tornadoes.
I'm glad that Droughts is available simultaneously in hardcover and paperback because, now more than ever, books on this topic are a much needed resource for early elementary readers across our country and around the world.
Posted by Melissa Stewart at 12:30 AM