In the Classroom: School Visit Magic

Doing school visits is one of my favorite parts of being a science writer for kids because it gives me an opportunity to connect directly with my readers.


Kids are so honest. They say what they think.


Kids are so curious. They have a million questions.


And they’re always making connections. Surprising, thoughtful connections. They help me see my books and my writing process in new and different ways.


Once in a while, when teachers and librarians have worked together to prepare students really well, I end up having incredible conversations with children about nonfiction books and writing. That’s what happened on Wednesday at Osborn Hill Elementary School in Fairfield, CT. 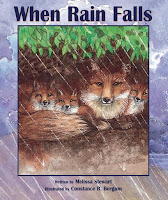 During my final presentation of the day, a second grader in Mrs. Cashel’s class asked an insightful, probing question about my book When Rain Falls:


“Would you say that book is narrative nonfiction or expository nonfiction?”


Why is that such a great question? Because there’s no clear cut answer. In fact, not long ago, I listened in as two skilled, experienced literacy educators from Maine debated this same question about my book Under the Snow, which is a companion title to When Rain Falls and has the same format. Each of those educators made convincing arguments to support her point of view.

While most nonfiction books for children can clearly be classified as having either a narrative or an expository writing style, some fall into a gray area. In the case of When Rain Falls and Under the Snow, wordless art on the endpapers and title page act as bookends that create a quasi-storyline surrounding an expository center that describes how various animals behave during a rainstorm or a cold, snowy winter.


So how did I answer that child’s question? By facilitating what turned out to be an astonishingly sophisticated conversation in which the primary students discussed many of the same points as the literacy educators. In the end, the children concluded that there really was no right or wrong answer. Brilliant!


Note: After the children left, I asked how they were able to have such a rich, thoughtful discussion. I discovered that their ELA curriculum is a modified version of Columbia University’s Teachers College Reading & Writing Project’s Unit of Study program. Earlier in the year, they had studied the difference between narrative nonfiction and expository nonfiction. Like me, the teachers were thrilled by the children's level of thinking and articulation and at how well they applied their prior knowledge.
Posted by Melissa Stewart at 12:30 AM