Behind the Books: A Place for Bats 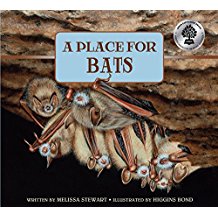 This is the fourth book I’ve revised and updated in the A Place for series. The original edition of A Place for Bats was published in 2012, and it’s hard to believe how much has changed for these furry fliers since then.

As I plunged into the research last winter, I realized that both the text and the artwork would need significant changes.


One bat had a brand new name—the tricolored bat. Two of the bats had overcome the challenges discussed in the first edition, but were now facing new dangers. The new edition also includes the latest information about what causes white nose syndrome and describes the benefits of installing bat escape ramps in livestock watering troughs.


In the end, much of the book’s text was rewritten and illustrator Higgins Bond painted three new illustrations.


With so much work to do, we all worried that the book wouldn’t make it to the printer in time for Spring 2017 publication. But thanks to a whole lot of hard work, late hours, and teamwork, we did make our deadline, which means the new edition of A Place for Bats went on sale on April 1. Hooray!


How can you use this book in the classroom? Find out next week.
Posted by Melissa Stewart at 12:30 AM