Behind the Books: Reflecting on the Sibert

One of the reasons the ALA Youth Media Awards are so exciting is because there are almost always some surprises. This year was no different.


I went into the awards pretty darn confident that Some Writer! by Melissa Sweet would win the Sibert, and I was really hoping that at least one of these three favorites would receive an honor: 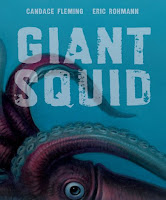 
Animals by the Numbers by Steve Jenkins

When Giant Squid received an honor, I was delighted. I wasn’t surprised that Sachiko by Caren Stelson also received an honor. Although it wasn’t one of my personal favorites, it was on Alyson Beecher’s list, and she’s usually right.


But the other two honor titles were big surprises to me. I consider Uprooted by Albert Marrin a YA title, and though I thought We Will Not Be Silent by Russell Freedman was well done, it didn’t rise to the top for me. What can I say? My heart is always with the science books.

Still, in the moments before they announced the winner, I remained confident about Some Writer! But then came perhaps the biggest surprise of all—March: Book Three by John Lewis and Andrew Aydin won its fourth award of the day.

There’s no doubt that it’s an important book, especially now. But to me it’s 100 percent YA. Also, I'm not so sure it's nonfiction. While it is clearly based on John Lewis's life, there's no indication that every single fact and bit of dialog has been verified. I'd call it historical fiction, but obviously, the Sibert committee sees things differently.


One last note, although I’m not surprised that science books didn’t fare well at the Youth Media Awards (It seems like they never do.), I want to assure you that there are plenty of wonderful STEM books being published for kids. You can find many of them on the Best of 2016 Nonfiction Lists featured here.
Posted by Melissa Stewart at 12:30 AM