TCRWP Handout: The Power of Voice in Nonfiction Writing

Nonfiction voice options span a continuum, from lively to lyrical. Your topic and the approach you take to it will dictate the best voice choice for a particular manuscript. 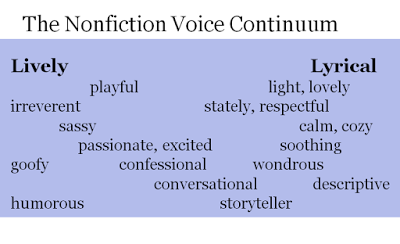 Bugged: How Insects Changed the World by Sarah Albee


Now Hear This by Melissa Stewart


Pink Is for Blobfish by Jess Keating
See How They Run by Susan E. Goodman


Ballet for Martha by Jan Greenberg and Sandra Jordan


Lightship by Brian Floca
Planting the Trees of Kenya: The Story of Wangari Maathai by Claire A. Nivola


Timeless Thomas by Gene Baretta
Posted by Melissa Stewart at 12:30 AM