If you’re a book nerd and you’ve been reading my recent Wednesday posts, you might think it’s interesting that when patrons were having trouble finding novels amongst all the other literature, early twentieth-century librarians pulled them (and short story collections) out of their “proper” Dewey Decimal order and created a separate fiction section.


Maybe librarians thought that would be too complicated. Or maybe, by then, the Dewey system was so established that librarians were reluctant to mess with it.


Well, they’re messing with it now. And the results are terrific.
In recent years, some children’s librarians have taken a close look at their nonfiction collections and done some rearranging to better serve the needs of their young, curious patrons. 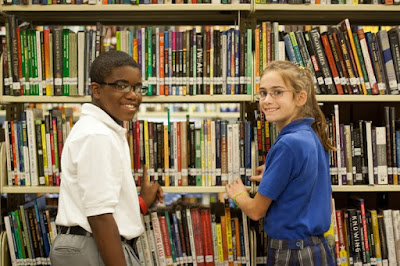 For example, Judi Paradis, the fantastic teacher-librarian at Plympton Elementary School in Waltham, MA, has rearranged her collection so that students interested in mummies, U.S. states, and outer space can find the full range of books on each of these topics more easily.


Judi noticed that most books about outer space have Dewey Decimal numbers between 520 and 525. But rockets are at 629. Since children interested in planets might also want to know more about rockets, Judi now shelves books about rockets at 520.


Most books about mummies have Dewey Decimal numbers in the 360s, but Egyptian mummies are in the 930s. Judi decided to shelve all the mummy books in the 930s and doesn't worry about the South American mummies getting upset.


I think these are great changes and would encourage more children’s librarians to take a close look at their collections and consider moving books to places where curious young mind can find them most easily.
Posted by Melissa Stewart at 12:30 AM