Behind the Books: How Nonfiction Got Its Name

You’ve heard comments like these:
“Nonfiction sounds so negative. Let’s come up with a new name.”


“We shouldn’t define something by what it isn’t.”
“Instead of nonfiction, why don’t we use true books or real books or fact books?”
But despite protests like these, the term nonfiction seems to stay with us. Did you ever wonder where the term came from in the first place? I did, so I did some research. Here’s what I discovered.
Our story begins in 1876. That’s when Melvil Dewey invented a (mostly) ingenious book cataloging system. Librarians were so impressed with the Dewey Decimal System that it quickly spread through libraries across America and the rest of the world too.
By the early 1900s, a growing number of library patrons were complaining that it was hard to find a good novel. That’s because “fiction” (novels and short stories) were interspersed among all the other categories of “literature” (essays, letters, speeches, satire) in the 800s. 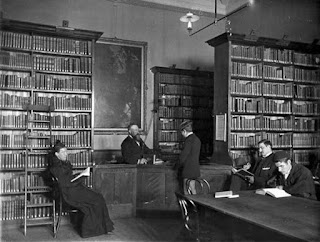 And that’s not all. The books in the 800s were organized by original language of publication. So novels by American writers were nowhere near novels by German writers or Portugese writers.


So sometime between 1905 and 1910, librarians started pulling novels and short story collections out of the 800s. They created a separate "fiction" section with books arranged alphabetically by the author’s last name.
Soon, people began calling everything else left behind (still arranged according to Dewey’s system) "nonfiction." And the word stuck.