Behind the Books: When I Became a Writer

One of the questions people frequently ask me is when I became a writer. My answer usually surprises them.


I wrote my first piece of nonfiction when I was around 4 years old. It consisted of one word, five letters. Missy—my childhood nickname.


The truth is that we are all writers from the moment we first put pencil to paper. And that’s something I really want kids to understand when I do school visits.


There are probably some people with an innate talent for writing, just as some people are more athletic than others. But getting to the Olympics is about much more than being born with talent. It’s about years and years of dedicated practice and hard work. So is becoming a published writer. 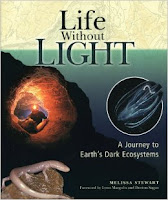 I published my first book, Life Without Light, when I was 30. Before that, I'd contributed maybe a hundred articles to magazines and newspapers.
I became a professional writer at age 21. (I received a whopping $4.00 for an article that appeared in a Greenwich Village community newspaper.) Before that, I'd written many articles and a column for my college newspaper.


I wrote my first published piece when I was 15. It ran on page 2 of my high school newspaper, “Here’s Hampshire.” And it made me very proud. Just as proud as holding Life Without Light for the first time.


But maybe not as proud as the very first time I wrote my name. Missy. That was a great day.
Posted by Melissa Stewart at 12:30 AM