Back in 2012, I wrote a book about the Titanic for the National Geographic Readers series. A few months later, Mary Ann Cappiello, Erika Thulin Dawes, and Grace Enriquez, three professors of language & literacy at Lesley University asked me to do an interview for their great blog The Classroom Bookshelf. But they didn’t want a traditional interview, they wanted a video interview. I didn’t have much experience making videos, but I decided to take on the challenge.

First, I tried sitting in front of my digital camera (set in video mode) and answering the questions they’d given me, but the result was, um, totally boring. What to do?


I wracked my brain for ways to make it more interesting, more fun, more interactive, and somehow I struck upon the idea of interviewing myself. That’s right. First, I dressed up “like a reporter” and recorded myself asking the questions. I kept telling myself that I was taking on a persona, and I should try to be as outgoing and energetic as possible.


Then I changed into my “writer outfit,” changed my hairstyle, moved the camera to a different part of the room, and recorded my answers to the questions as myself. Finally, I used a video editing program to cut apart the recordings and splice them back together, so the interview seemed to flow seamlessly.


I sent the video to my mother for her opinion, and she said she hated it. Uh-oh. I’d worked really hard on it, so I decided to show it to my husband. He said he thought kids would like it, so I sent it to The Classroom Bookshelf, and they posted it. I also added it to the Video section of my website.


It turns out my husband was right. Kids do love it. In fact, it’s one of the most viewed pages on my website.


From time to time, students contact me (via their teacher) because they want to know if I’m interviewing myself. I guess I did such a good job taking on a different persona as the reporter that kids aren’t quite sure if it’s really me.

A few weeks ago, I attended nErD Camp Northern New England and had a great day. During the after party, as I snacked on an ice cream sandwich (Thanks, Lesley Burnap!) and chatted with a group of fabulous Long Island educators, Erica Pecorale, Assistant Professor at Long Island University, told me an amazing story about my Titanic video.


When she showed the video to a class, the “identity question” was solved by some special needs students. Because they had difficulty interpreting body language and facial expressions, they had undergone special training to help them, and they were able to use what they learned to prove to their classmates that I was playing both roles. Isn’t that fantastic!


I love that those students were able to teach their classmates something. Just imagine how proud and excited they must have felt in that moment. Just imagine. 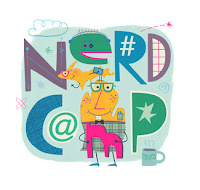 I love nErDcamp because spending time with dedicated teachers is so, so, SO educational and inspirational. Thanks so much to all the people who organized nErdcamp NNE and to Colby Sharp for bringing together the Nerdy Book Club and EdCamp in the first place.