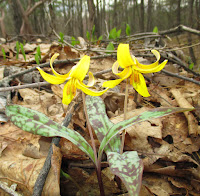 It all began with a joyful romp in the woods with my husband over the weekend. We knew the time was right for wildflowers, so we went out to see what we could find.

After much memory prodding while we were on the trail, I remembered that these little beauties are called yellow trout lilies (because the pattern on the leaves reminded people of the spots on a trout).

We noticed mayflies landing on the flowers, so I wondered if they pollinate the plant. When we returned home, I did some quick research and discovered that early native bees, such as bumblebees, are the most common pollinators of trout lilies. And that inspired my haiku.

Wouldn't that make a great science lesson for kids?
1. Discover something in nature.
2. Write a wonder statement about it: "I wonder if mayflies pollinate yellow trout lilies."
3. Do some research to find the answer.
4. Document that new knowledge in a poem.

Because I wrote that haiku, I guarantee that I'll never forget what pollinates those flowers. Isn't that the kind of thing you'd like young explorers to be able to recall when they're 40, 50, 60 years old? And couldn't carrying that knowledge change the way they think about the natural world? I think it could.