Behind the Books: Nonfiction Voice, Part 1

Since October, I’ve been thinking about ways to classify nonfiction. I’ve looked at nonfiction text types and styles—two new tools in my writer’s tool box. I’ve also taken a fresh look at structure. This week I’m going to describe some of my new thoughts about voice.


In the past, nonfiction books for kids were straightforward, stodgy, and voiceless. In fact, if I had submitted a manuscript with a strong voice to an editor ten or fifteen years ago, it would have been rejected. But today, voice is an important component of engaging nonfiction titles.


Some books feature a strong lively, playful, humorous style, while others have soft, sweet lyrical voice. But these descriptions represent two extremes in a broad spectrum of voices. I created the visual below to help me think about this continuum. 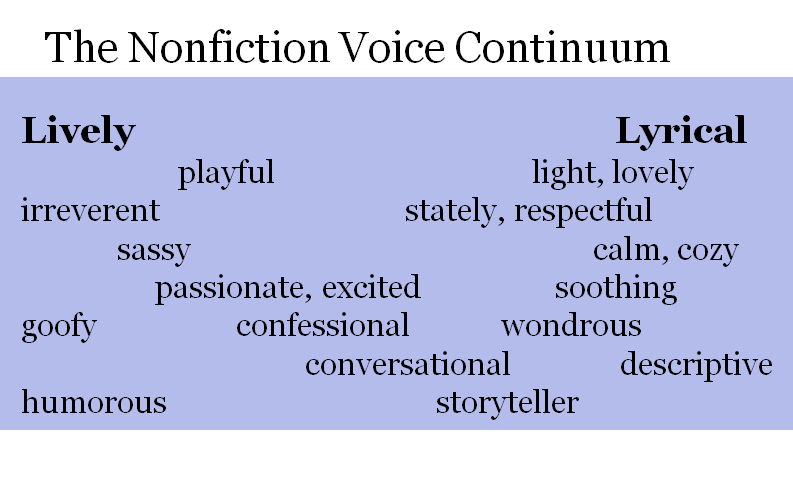 Nonfiction authors choose a voice based on their topic and the approach they want to take to that topic. For example, if you are writing about a picture book biography about a person with a sassy personality, you should use a playful voice. What to Do About Alice? by Barbara Kerley is a good example. On the other hand, when writing Planting the Trees of Kenya: The Story of Wangari Maathai, Claire A. Nivola used a lyrical, descriptive storyteller voice because it reflects the personality and accomplishments of her subject.


A lively, conversational voice is often a good choice for long-form expository books, while a more wondrous, lyrical voice is more appropriate for a nature-themed picture book. Let your topic and your purpose for writing guide you to the best possible voice choice.


Books with a Lively Voice
Animal Grossapedia by Melissa Stewart


See How They Run by Susan E. Goodman