Behind the Books: Curriculum Connections

Behind the Books: Curriculum Connections

A few weeks ago, three children’s book-loving organizations—Lesley University Department of Education, The Eric Carle Museum of Picture Book Art, and the Society of Children’s Book Writers and Illustrators--joined forces to present a full-day workshop for educators, and it was a huge success. 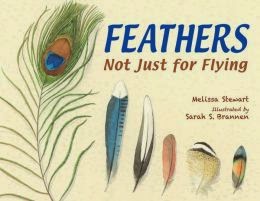 One of the eleven featured books was Feathers: Not Just for Flying. Here are some of the great teaching ideas developed by Erika Thulin Dawes, Associate Professor of Language and Literacy, Lesley University.


Local Bird Guide. Have students select birds you can find in your community that they would like to research in greater detail. Students may do this individually, in pairs, or small groups. Read Look up! Bird Watching in Your Own Back Yard for inspiration. Work with students to create a guide for observing birds in your area. Have students convey what they believe is most important to share about their bird. Ask your public library to display students’ finished work.


Feathers Not Just for Birds?: Exploring the Bird / Dinosaur Connection. After reading, Feathers Not Just for Flying, students may be inspired to learn more about recent discoveries indicating that more dinosaurs may have had feather than scientists had previously thought. Read sections of Catherine Thimmesh’s Scaly Spotted Feathered Frilled: How Do We Know What Dinosaurs Really Looked Like? along with online resources to support students’ inquiry into scientists’ evolving understandings of the connection between dinosaurs and the birds we see every day
Similes Metaphors in Science Writing. Authors of nonfiction often use similes and metaphors to help readers better understand and/ or visualize the scientific concepts they want to convey in their writing. Melissa Stewart employs this technique through Feathers Not Just for Flying (hear Melissa describe this technique in her video mini-lesson: http://www.melissa-stewart.com/sciclubhouse/teachhome/writing_info.html). Record several of these metaphors on a large piece of chart paper. Read aloud another science trade book in which the author uses similes and metaphors, such as Big Blue Whale by Nicola Davies. Ask students to identify the similes and metaphors in the book and to record them on chart paper. Add to this chart over a period of a couple of weeks as students collect additional examples from their reading. Invite students to use metaphors to enliven and improve the clarity of their nonfiction writing.
Specialized Nonfiction: Duet Model with Bird Beaks. With its in depth and specific focus on bird feathers and their functions, Feathers Not Just For Flying is an example of the subgenre of nonfiction known as Specialized Nonfiction. Compare the writing and styles and organizational structure of this book with Beaks by Sneed B. Collard, III, reading the two titles in a Duet Model (Cappiello & Dawes, 2012). There are subtle differences between these two examples of specialized nonfiction, as well as many similarities to discuss. Following this comparison exercise, invite students to research and write about bird feet types, using these two texts as models.


In addition, Erika suggested pairing one of the other featured books, Handle with Care: An Unusual Butterfly Journey by Loree Griffin Burns, with the newly-revised  edition of A Place for Butterflies.


Duet Model Reading with A Place for Butterflies. To engage your students in a comparison of butterflies in their natural habitats and butterflies on a farm, such as El Bosque Nuevo, read Handle with Care: An Unusual Butterfly Journey paired with Melissa Stewart’s A Place for Butterflies. Provide students with lots of discussion time to share their learning about butterfly life cycles, habitats and behaviors, and the need for conservation efforts. These two titles could be used to launch a unit of study on butterflies focusing on their role in ecosystems, current threats, and conservation efforts. After their initial reading and discussion to these two titles, students can brainstorm a list of inquiry questions to pursue, using additional print and digital texts.
What a great event!
Posted by Melissa Stewart at 12:30 AM