Behind the Books: Beneath the Sun 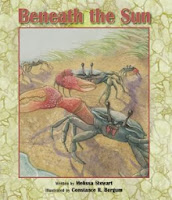 I’m delighted to announce that yesterday was the publication date for my new book, Beneath the Sun. It’s a summery companion title for my previous book Under the Snow.

Under the Snow came out in September 2009, and a few weeks later, my editor suggested that I write a companion title about how animals survive on the hottest days of the year. So why was the book 5 years in the making?


Here's the story behind the story. I submitted the book in April 2010. I heard back from my editor in December 2010, and we went through a few rounds of revisions.


After that, things moved quickly and the publisher was able to send the final files to the printer on Halloween. Most picture books take about 6 months to print, and that brings us right up to yesterday’s publication date.


It can be hard to wait so long for a book to take physical form, but I’m thrilled to finally hold it in my hands. Here’s hoping kids like it as much as they like Under the Snow.
Posted by Melissa Stewart at 12:30 AM