Behind the Books: Feathers 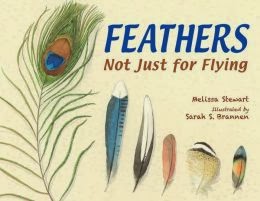 Yesterday was the official publication date for my new book, Feathers: Not Just for Flying. I am especially excited about this book because it has already received a starred review from Publisher's Weekly and because was illustrated by my friend Sarah S. Brannen.


Sarah is a member of my critique group and first saw the book in its very early stages. But she was so inspired that she created a painting, which in turn inspired me. It made me believe in the manuscript and fight to find the best way to present the information.


So when the manuscript eventually was accepted, I suggested Sarah as a potential illustrator. By this time, she had created several feather paintings and put them added them to the gallery on her website.


Voila! She got the job.


Even after acceptance, this little book had to overcome many hurdles. Three editors worked on the book, and late in the game, we discovered an arcane law stating that it is illegal to even pick up most of the feathers the average American might find on an afternoon walk through the woods. This meant Sarah and the art director had to quickly come up with a way to maintain the book’s magic without showing a kid breaking the law. But it all worked out, and we are both excited to finally bring the book into the world.
Posted by Melissa Stewart at 12:30 AM