I’ve taken the summer off from blogging, so I thought I’d gently ease back into the groove with a fun post with cool insect photos. Last weekend, my husband and I headed to our favorite getaway, Mount Washington in New Hampshire.


As he was loading the car, I noticed this gargantuan beast hanging out (literally) in our garden. It’s one of the largest Argiope spiders I’ve ever seen. 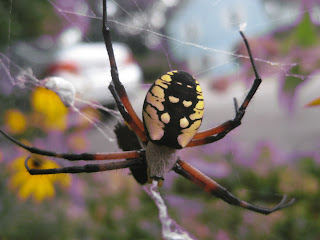 It was an auspicious beginning to our trip because when we were on the mountain, we spotted this critter. Look at that amazing iridescent blue glimmering in the sunlight!. 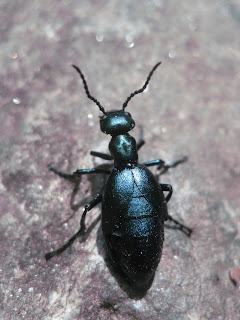 I had no idea what it was, so I pinned it on the Buglife pinterest board I share with my brother in law, science writer Peter Fairley.


Then I linked the pinterest image to a Tweet and asked the Twitterverse for help with an ID. About 5 minutes later, I had an answer.  Middle grade author and zoologist @JessKeating suggested that it might be an American oil beetle, and after some googling around, I’m quite sure she’s right. Thanks, Jess.


It’s a good thing we decided not to touch the bug-in-question. Turns out it’s a member on the blister beetle family. When disturbed, it releases some very nasty chemicals that burn human skin and cause painful blisters. Ah, nature!
Posted by Melissa Stewart at 1:00 AM 2 comments: