Behind the Books: A Look at Voice in Nonfiction

What is voice? It’s the personality of the writing. It’s how the writing makes you feel. 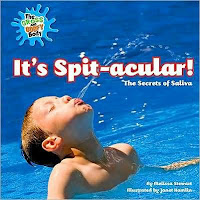 As you read the following passage from my book, It’s Spitacular, try to come up with some words that describe the voice. What is it’s personality? How does it make you feel?


“Spit a little saliva into the palm of your hand. Now take a good long look. What do you see?

Spit is a clear, slippery liquid. It looks a lot like water, but it’s a little slimier, and it’s full of tiny bubbles. If you haven’t brushed your teeth lately, your spit might also contain tiny bits of food. Ew! Gross!

There’s a good reason spit looks like water. Water is its main ingredient. But spit also contains many other things. They help saliva do its job.

The slimy mucus in spit makes swallowing easier. Proteins in saliva start to break down food before it reaches your stomach. Spit also contains salts, gases, and all kinds of yucky germs. That’s something to think about the next time someone hits you with a spitball.”


Did you come up with words like these? They describe the voice.


Here are some more great nonfiction book with a humorous voice: 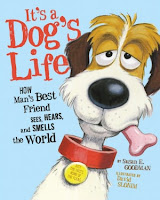 
It’s Spit-acular: The Secrets of Saliva by Melissa Stewart

Poop Happened: A History of the World from the Bottom Up by Sarah Albee

See How They Run: Campaign Dreams, Election Schemes, and the Race to the White House by Susan E. Goodman (illus Elwood H. Smith)

The Story Goes on by Aileen Fisher


What to Do About Alice? by Barbara Kerley (illus. Edwin Fotheringham)


What to Expect When You’re Expecting Larvae: A Guide for Insect Parents (and Curious Kids) by Bridget Heos
Posted by Melissa Stewart at 9:33 AM