Behind the Books: More Fun in Philly 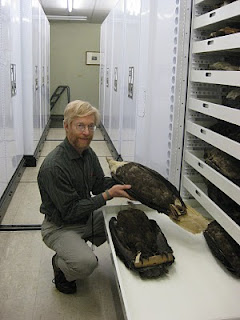 A couple of weeks ago, I spent a few days in Philadelphia for this year’s NSTA conference. But one morning, I skipped out on the conference to visit my friend Doug Wechsler.

Doug also has one of the coolest day jobs around. He works at the Academy of Natural Sciences and is in charge of the largest collection of bird photographs in the world! It’s called VIREO, Visual Resources for Ornithology. 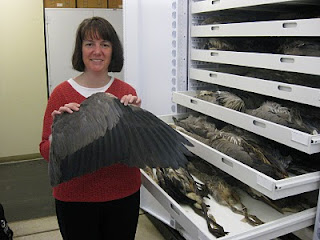 So I headed on over to the Academy to see Doug. As you can tell from this photo of me holding a great blue heron's wing and the one of Doug above showing off a wonderful bald eagle specimen, I also got a tour of the Academy’s world-class collection of taxidermic birds.

First I saw dozens of hummingbirds. Their irridescent feathers still reflected light in the most amazing ways. Then we looked at some of the larger birds in the collection, including eagles, osprey, and herons. I was expecially interested in these species because I've created life-size paper models of their wings for a school visit program based on my book A Place for Birds. 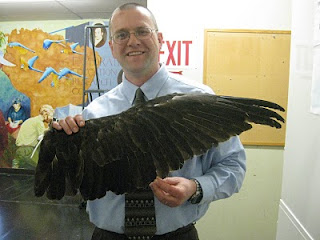 I also met Nate Rice, the smart and charismatic scientist who manages the taxidermic collection. He told me about some of the fascinating ways scientists are studying isotopes from this osprey’s wing to get a better sense of migrational patterns as well as molting cycles. Very cool stuff!
Thanks, Doug, for a fantastic morning!

Posted by Melissa Stewart at 5:07 AM

Email ThisBlogThis!Share to TwitterShare to FacebookShare to Pinterest
Labels: Behind the Books, Research, Writing Life