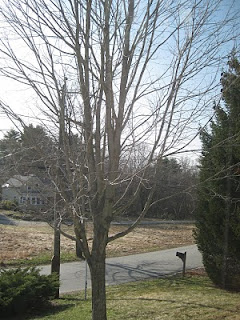 This morning I have good news and bad news. Let’s get the bad news out of the way first.

It looks like my experiment failed. The buds on the branch I brought indoors last week are still closed up tight. I can’t tell if the branch is drawing water or not. Maybe I should have cut the branch at an angle—the way you do with rose stems.

Maybe I’ll try again next year. With the warm temperatures we’ve been having lately, I think my tree will leaf out naturally earlier than normal this year. I’m waiting . . . 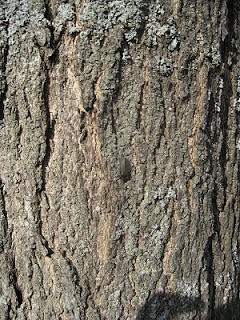 Okay, now we can focus on the good news. There’s LIFE on my tree! I’m so excited.

While I was picking up sticks around the yard yesterday, I took a good long, close up look at the tree. At first, I didn’t see much.

But then, I noticed a little beetle on the south side of the tree. Yippee! Can you see it in this photo?

After I ran inside, grabbed my camera, and took a photo, I started looking closely all around the trunk. I didn’t really expect to see more, but, hey, you never know. 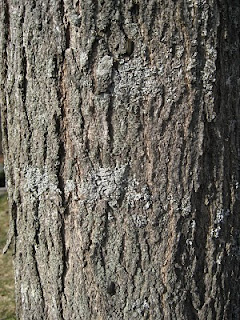 Turns out my diligence was rewarded. The more I looked, the more beetles I saw. There were two on the southeast side of the trunk. One was nestled in a crevice and really hard to spot.
Can you see the one near at the top of this photo? The one at the bottom is much easier to make out.

In all, I found about a dozen beetles. It was hard to get an exact count because they kept crawling around. Hmph!

After taking a few more photos, I came indoors and tried to identify the beetles. They have black bodies and look kind of like lightning bugs, but their heads look a little different and their bodies are fatter. The most noticeable features are (1) the head and thorax are hard to distinguish, and (2) they have reddish stripes along the sides of their head/thorax. 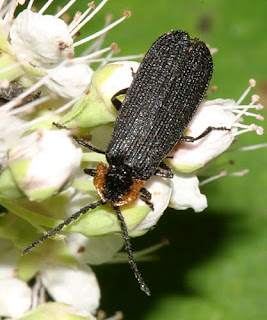 I looked at a lot of beetles and finally decided they look quite similar to some of the net-winged beetles. So I focused in on that group.

Then I can across the image to the left. That’s it! The insect’s genus name is Plateros, but no species name is given.

Apparently, they suck on plant juices and nectar. That raises an interesting question. What are they eating at this time of year? Some species don’t feed at all as adults, maybe these are among them.

The beetles may use my tree as a staging area. Or perhaps they overwintered so deep inside the nooks and crannies of the bark that I didn’t even notice them.

I’ll have to keep watching to see if they stick around.

Posted by Melissa Stewart at 5:40 AM