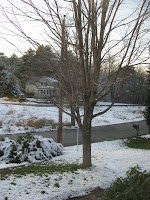 Look at my maple. Do you notice anything different? If you look closely, you’ll notice a little bit of white stuff stuck in the crotches and there’s some ice frozen to a few of the outermost twigs.
Those are telltale signs of a weekend full of excitement. The first snow!

The storm started late Saturday afternoon and raged all through the night. It began slowly, but after dinner, we enjoyed the big, beautiful, gloppy flakes plunking down all around us. That’s what happens during late autumn (Hard to believe, but it won’t officially be winter for 2 more weeks.) and early spring storms. During these storms, the air isn’t too cold, so not all of the water is frozen. That makes the snowflakes clump.

On Sunday morning, the lawn was blanketed with snow, but most of the driveway was covered with a thick sheet of ice. Yikes! 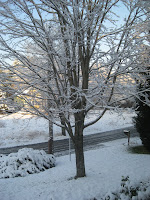 Here’s what my maple looked like yesterday morning. Isn’t it lovely? Our backyard is ringed with trees, mostly large evergreens. Their boughs hung low to the ground, creating a true winter wonderland.

Yesterday afternoon was fairly warm, so I thought all the snow would melt. But there's still a nice coating on the ground right now. Let’s see how long it sticks around.
Posted by Melissa Stewart at 7:22 AM