The Benefits of a Visual-Tactile Writing Process

Not long ago, I spotted these two side-by-side images in a tweet from award-winning nonfiction author Steve Sheinkin. He was celebrating the completion of a book by showing that he had taken down his visual-tactile outline, and his magnetic white board was ready for him to begin work on a new title.

Look at all those colorful index cards. They made me so curious about his process. I was bursting with questions.

What does each card represent? A scene perhaps?

Are the colors random or do they have a meaning?

What about the white cards? Do they represent the start of a new chapter?

But most of all I wondered how Steve had come up with the idea to display the elements of his book in this way—right in front of his computer, allowing him to see everything at a glance. What are the advantages? Are there any disadvantages?

One thing’s for sure—this isn’t the way students learn to outline in school. But maybe it should be. Why not make it visual-tactile? In fact, why not make it whatever kids want it to be—whatever works best for them? What can we do to help students develop a system that perfectly meets their needs? 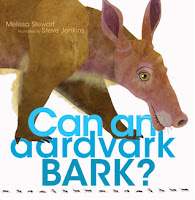 One reason I’m so interested in Steve’s display is because my book-planning process has become more visual over time too. For example, for Can an Aardvark Bark?, I wrote the animal sounds I wanted to include on Post-It notes, stuck them to the wall between the living room and my office and then sorted them until I came up with the perfect way to organize the examples in the book. 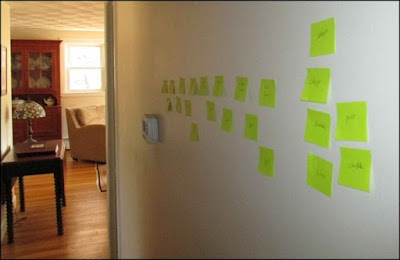 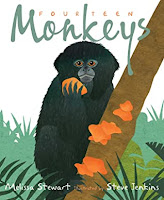 For my upcoming picture book, Fourteen Monkeys: A Rain Forest Rhyme (available for pre-order now), I was initially having trouble keeping the fourteen monkey species in the book straight. I kept having to doublecheck their characteristics:

Which one was it that eats tree sap?

Which species sleeps with their tails twisted together?

Which one is nocturnal?

Which one can leap an incredible 32 feet?

To solve this problem, I decided to make monkey flashcards. I printed out photos of each monkey, cut them out, and glued them to index cards. Then I wrote out a quick list of the monkey’s notable characteristics on each card. 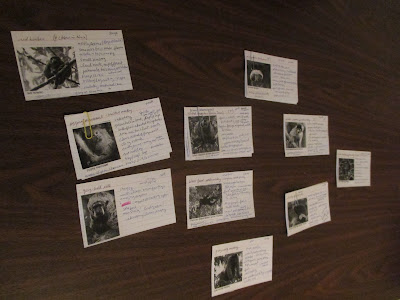 These mini cheat sheets worked great, but then I realize I could also place them on a large table and move them around to experiment with different ways of organizing the text. Trust me, it’s SO much quicker and easier than repeatedly cutting and pasting text in a computer file.

Because Fourteen Monkeys has  four layers of information—diet, body size, height in the rain forest, and characteristic behaviors, it was easy to get stuck focusing on all the details I was trying to include. The index cards provided a physical representation of the book’s bigger components, and the act of sorting them helped me with pacing and text structure.

From the beginning of the planning process, I knew that the book would have a compare and contrast text structure. But I thought that embedding a second structure might enrich the presentation. As I juggled the index cards, inspiration struck. I realized that if I overlaid a sequence structure by organizing the monkey’s activities from morning to night, the ending would feel more satisfying to a broad range of readers. I don’t think that idea would have occurred to me if I’d been working with just the text in a computer file.

I may not use this strategy for every future book I write, but it’s a good tool to have at my disposal.