Last week, I posted these intriguing before and after images of uber-talented nonfiction author Steve Sheinkin’s storyboard, which I spotted on Twitter. Then I posed some questions about  it and discussed the visual-tactile strategies I’ve developed to help me organize my books.

The good news is Steve agreed to answer my questions and discuss his process. I’m sure you’ll find his explanation as fascinating as I did.

Okay, the index cards? Very twentieth century, I know, but they work for me, and I’ll never switch to using a computer for this part of the book-writing process. 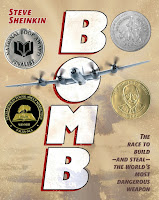 It started with my attempts, and failures, to outline the research I collected for what became my nonfiction thriller, Bomb.

I was finding lots of great stuff, “must-have” material as I call it—the makings of lots of great scenes. But I couldn’t figure out how to fit it all together, how to turn these different story lines into one cohesive page-turning plot.

I tried lots of conventional outlining techniques, but things kept getting muddled. The notes spread over many pages and I couldn’t see it—I literally couldn’t see the story.

I realize now that I’m a visual learner. I guess that term hadn’t been invented when I was a kid, though it would have helped me understand my strengths and weaknesses as a student.

Anyway, I decided to try using the kind of storyboarding I’d learned about in a screenwriting class. Break your story into scenes (about 40 for a typical movie structure) and use one index card or sticky note to represent each scene. Then stick everything on the wall and see how it looks. Sit back and watch it. See how one scene flows into the next. See how the storylines interact. Check for dull parts, unnecessary tangents, make sure your momentum is building.

With Bomb, I knew I wanted to weave together three related storylines: scientists racing to make the first atomic bomb, spies trying to steal the secrets, and commandos assigned to sabotage Hitler’s bomb research. So I used three different color index cards: one color each for scientists, spies, and commandos. Simple, but it really worked for me.

On each card I wrote a bullet point or two describing a distinct bit of action, say, Robert Oppenheimer learning about fission and sketching a bomb on his blackboard at Berkeley, or two spies meeting on a bridge in Santa Fe. Each card represented about 400 words. Once I put all my best stuff on different color cards, these became like pieces of a puzzle. Then came the fun part—putting it together.

The image above shows part of my storyboard for an upcoming nonfiction book called Fallout—my take on a Cold War thriller, with a lot of the science and spying and fast cutting between storylines I tried for in Bomb.

The white cards on the board simply represent chapters. I’m constantly changing where chapters begin and end, right up until my final deadline.

One change I’ve made over the years is to add an extra color for context/background info. You always need a certain amount of “okay, here’s why we’re fighting the Cold War” kind of stuff, or “here’s what else was going in the world at this time,” and I’ve found it helpful to use a different color for that stuff—purple in this example. That way, I can see right away where these sections fall, and get a feel for where I may be slowing down to do too much explaining.

The benefit of having all of this right in front of me as I write is that I can look up and see where I am in the story. I can see what just happened, and what happens next. I can watch the scene on one card in my head, then watch the next one, and see if they work together.

I can always reach out and move stuff around, or put something to the side in the “cuts” area, a sad but necessary part of the process. I’ve even got a little magnetic Lego Steve (made by my son) that moves along with me through the first draft—it’s very satisfying to move “me” along as I finish one card and start the next! 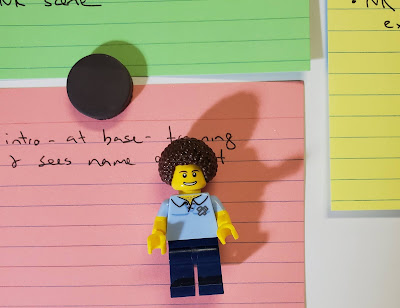 Steve Sheinkin’s nonfiction titles include The Notorious Benedict Arnold, Bomb, The Port Chicago 50, Most Dangerous, Undefeated, and Born to Fly. His books have received a Newbery Honor, three National Book Award finalist honors, three Boston Globe-Horn Book Awards for nonfiction, and a Sibert Medal. Steve’s upcoming book, Fallout: Spies, Superbombs, and the Unlikely Cold War Showdown is due out in September.
Posted by Melissa Stewart at 12:30 AM