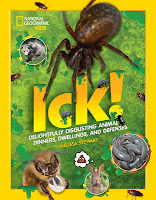 Before Memorial Day, I began this blog strand by sharing an expository passage from my upcoming book Ick! Delightfully Disgusting Animal Dinners, Dwellings, and Defenses (on Monday) and a related narrative passage from Honeybee: The Busy Life of Apis mellifera, a wonderful new book by Candace Fleming and Eric Rohmann (on Wednesday). You can scroll down to read the passages and explanations from each author about the choices we made. 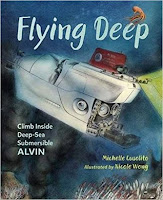 This week, I’ll be presenting two passages about amazing deep-sea creatures.  Today, we’ll look at a second spread from Ick!, and on Wednesday, author Michelle Cusolito will tell us a little bit about her writing process for the so-totally-cool narrative nonfiction book Flying Deep: Climb Inside Deep-Sea Submersible ALVIN, illustrated by the very talented Nicole Wong. 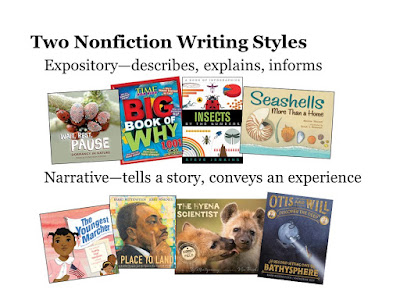 My hope is that this series of blog posts will help educators and other members of the children’s literature community gain a more solid understanding of:


--the differences between the two writing styles (narrative v. expository),


--when it makes sense to use each of these writing styles,


--how each type of writing appeals to particular subsets of children, and


--how sharing expository and narrative passages together provides powerful pedagogy.

Okay, here’s the spread from my expository nonfiction book. 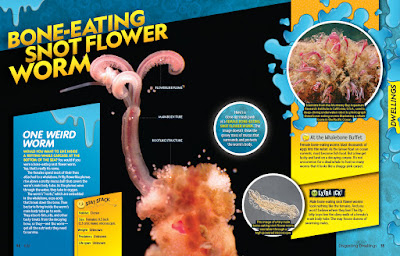 Notice that it’s illustrated with photographs, including a labelled close-up image of one of the strangest critters on Earth—the bone-eating snot flower worm. The spread includes a variety of text features, such as a sidebar, a factoid, and captions bursting with fascinating facts. Plus there’s a stat stack for kids (and adults) who love data.

Even though there are a lot of elements, readers don't feel overwhelmed because the design helps them navigate the spread, from the yellow headline, to the central photo, to the main text on the left, and finally randomly exploring the secondary text blocks.

Here’s the main text for this spread:


One Weird Worm
Would you want to live inside a rotting whale carcass at the bottom of the sea? You would if you were a bone-eating snot flower worm. Yep, that’s really its name.


The females spend most their lives attached to a whalebone. Frilly, flowerlike plumes rise above a snotty mucus ball that covers the worm’s main body tube. As the plumes wave through the water, they take in oxygen.


To make the expository description engaging, I employed a casual, conversational voice and included lots of strong, precise verbs with a sprinkling of alliteration.

From the moment I began thinking about Ick!, I knew it would be a list book with an expository writing style. Expository nonfiction (which explains, describes, or informs in a clear, accessible way) is generally the best way to present narrowly-focused STEM concepts, such as how an animal’s unique body parts or behaviors help it survive in the world. It’s also a good choice for sharing information in short blocks of text accompanied by lots of visuals and a range of text features.

The challenge of writing expository nonfiction is choosing a great hook, a compelling text structure, and just the right voice. Since gross animals are a built-in hook, that was the easy part of conceiving this book. Because I had tons of intriguing animal examples, I knew a list text structure would work. And based on past experience, I was confident I could craft the playful voice the book needed.

On Wednesday, Michelle Cusolito will share how and why she decided on a different approach for discussing some incredible deep-sea denizens. Her wonderful narrative nonfiction book Flying Deep puts young readers in the pilot’s seat for a thrilling journey to a hydrothermal vent far below the ocean’s surface.
Posted by Melissa Stewart at 12:30 AM