Today we continue the Nonfiction Authors Dig Deep series with an essay by author Michelle Markel. Thank you, Michelle.

The picture book biographies of my youth were bloodless recitations of facts. Many years later, when I started writing for children, a new type of illustrated bio was becoming popular: expressive, artistic, poetic. I wanted to write one too!


It took a while to figure out how to do it.  I sold one biography, then suffered rejections for several years. I was having the dark night of the soul. Then I met Henri Rousseau. Preparing an art program for kids, I came across his “Sleeping Gypsy.” 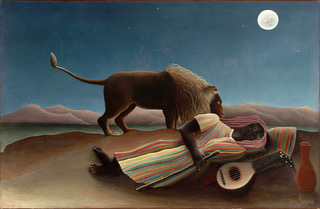 I’d seen the painting before, but this time it spoke to me, the mysterious figure, the moonlit desert, the sweet plush lion that reminded me of a stuffed toy I‘d had as a child.


I read up on the artist and learned that he refused to be crushed by the snarky art critics, who publicly ridiculed him year after year. Besides painting and exhibiting, Henri gave music lessons to children in the neighborhood, wrote plays, and threw concerts in his little apartment. I felt a great sympathy and admiration for him.  I believed kids would feel the same way, and thought they’d enjoy his whimsical jungle pictures. 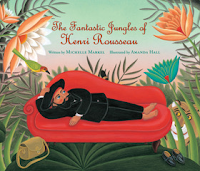 I studied Henri’s paintings of cavorting apes and monkeys and imaginary plants. I read his letters and the books written by his friends. And the coolest thing happened. As I worked on that manuscript, the artist’s playful, rule-breaking spirit cheered me on. He helped me free up my inhibitions, loosen up my sentences, and find my voice as a nonfiction author. Henri turned my career around. The Fantastic Jungles of Henri Rousseau won a 2013 PEN/Steven Kroll award for picture book writing.

I’m attracted to stories of perseverance. I was drawn to Clara Lemlich, a lifelong labor activist, for a few reasons. Clara came to America from Eastern Europe, as did my grandparents, and, like my father (a former airline mechanic and president of his machinist union), Clara was an advocate of workers’ rights.
The story of Clara’s role in the Shirtwaist Makers’ Strike of 1909 is highly dramatic. Reading the details about the strike brought me to tears—how the immigrant garment workers, many in their teens, fought for humane conditions in the factories; how they stood up to hunger, cold, beatings, and arrests by police and company thugs. I felt an obligation to write this story, even though I had serious doubts that I’d sell it (there are few picture books about feminist labor history). 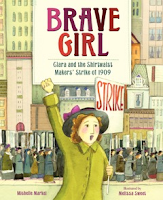 In the manuscript, I describe how Clara’s bravery empowered the other garment workers. She empowered my writing too. In one of her interviews Clara said that back then “she had fire in her veins.” That fire spread into Brave Girl. 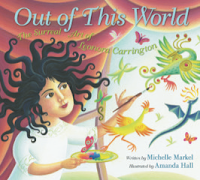 My newest book, Out of this World: The Surreal Art of Leonora Carrington, is about another type of rebel. Leonora’s otherworldly pictures feature mythical beasts and empowered females—a giantess, women who can grow little trees on their heads and float through ceilings.
Defying societal norms for her class and gender, Leonora moved to Paris to be an artist among the Surrealists. Though my background is quite different from the artist’s (she came from an upper class British family), I relate to Leonora. As a little girl, I was crazy about fairy tales too. 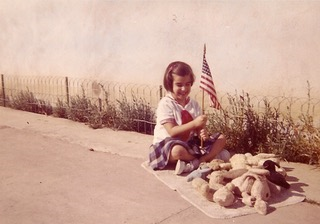 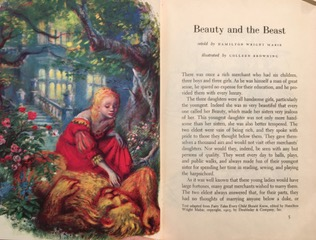 I loved reading about Leonora’s friendship with the Spanish artist Remedios Varo, whom she met in Mexico after fleeing the Nazi’s. The two of them were kindred spirits, cooking up stories and strange concoctions, dressing in costumes, dreaming up their own magic spells and remedies. Their sisterhood reminded me of the joy and emotional support I’ve gotten from my creative women friends.


Leonora inspired illustrator Amanda Hall and me to take our own risks, and submit this book as a joint project—which you’re not supposed to do.  We were thrilled to find a publisher for this project.


Fine literature is about the human experience, and picture book biographies are no exception. The best of them give a sense of the subject’s humanity, of her inner life, passions, and struggles. I want my nonfiction stories to have a beating heart! To write them, I’ve got to be emotionally involved.

Michelle Markel is the author of several acclaimed nonfiction picture books, including  The Fantastic Jungles of Henri Rousseau (PEN Steven Kroll Picture Book Writing Award), Brave Girl: Clara and the Shirtwaist Makers’ Strike of 1909 (Jane Addams Flora Stieglitz Award; Orbis Pictus Honor), and Balderdash: John Newbery and the Boisterous Birth of Children’s Books (16 state awards). She has been an instructor at UCLA Extension’s Writers Program, a teacher, and a freelance writer. Her home is in Woodland Hills, California. Visit her website: www.michellemarkel.com.
Posted by Melissa Stewart at 12:30 AM