I’m excited to host award-winning author and poet Laura Purdie Salas, who has an important message for us to consider. Thanks, Laura.


I try not to take it personally, but there’s a common, crushing misconception that fiction is creative writing drawn from the depths of a writer’s soul, while nonfiction is simply a recitation of facts that any basic robot could spit out. 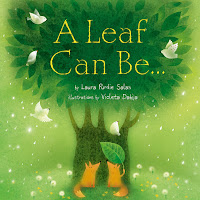 The reality is very different. I think my personality, my beliefs, and my experiences are deeply embedded in the books I end up writing. Here are some examples.

A Leaf Can Be . . . (Millbrook Press, 2012)
I changed majors a lot in college. I tend to get bored easily, and that’s one reason poetry and picture books call to me. They are small, close, brief examinations of a topic.


I tend to think about topics broadly and ask, “What else?” For example, A Leaf Can Be . . . began when I read an old poem I had written about Honduran tent bats and their leafy shelters. Some writers might have wanted to delve into that relationship in great detail. But because I like lists and variety, my question was not, “Why?” or “How did they evolve to do that?” It was, “What else do leaves do?”


Another way I am present in my Can Be… books is that I have a deeply felt sense of justice, and I tend to root for the underdog. I find that exploring the wonders of underappreciated things is a common thread in my work. 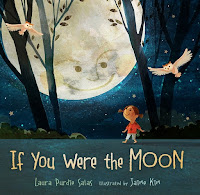 If You Were the Moon (Millbrook Press, 2017)
This is another list poem (basically) exploring the roles of an everyday (or every night) object. But this topic was more personal for me.


My dad worked as a NASA engineer at Cape Canaveral during my childhood. He talked about the space program a lot at the dinner table, but it was usually more about office politics or chemistry and physics way beyond my understanding.
Still, I was awed by our solar system, by space travel, by watching space shuttle launches. In college, I was devastated to witness the Challenger explosion.
When I started this book, I needed facts, of course. But I also wanted to explore my own emotions about space and the moon. And I wanted to present the moon in an accessible way that would leave kids inspired, not confused. I wanted to help kids make friends with the moon, in a way I couldn’t as a kid. So, I compared the moon’s actions to things kids do, like play tug-of-war or miss their friends. 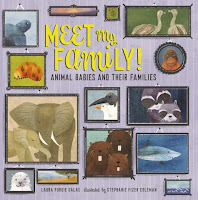 Meet My Family!
This is my brand new picture book, and I feel like it’s been growing wings inside me for more than 40 years.

When I was a kid, my family was very different from my friends’ families. My parents were super strict. Five hours of TV per week, maximum. We kids paid part of the electric bill. Straight As weren’t good enough. We were estranged from most extended family.
On top of that, one of my sisters had a brain condition we now call OCD, and she washed her hands hundreds of times per day. Back then, that was just considered weird—not recognized as a medical condition.


While visiting schools, I’ve had students write poems about divorced parents, parents they’ve never known, being adopted, and more. Kids often feel such unwarranted shame. My own remembered shame about my family was like an engine driving this manuscript. It’s a nonfiction book about the different structures of animal families. But more importantly, it’s a book that says to kids, “Your family is okay. As long as you are loved, you are okay. You are okay.” I don’t think there’s anything more important that I have to say to young readers.


So all my little quirks, loves, and fears shape the books that I write. I’d love to see more recognition that this is true for most nonfiction books. And imagine all the exciting nonfiction that students will create as we encourage them to infuse all their writing—not just their fiction—with the qualities that make them who they are. 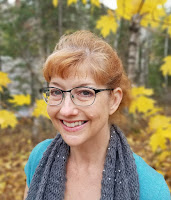 Laura Purdie Salas thought books appeared by magic when she was little. She read non-stop, but the library had a bottomless supply of books to feed her hunger. As a children’s author, she knows there’s a lot of work involved in bringing books to the world—and still plenty of magic, too!
Laura is a former 8th-grade English teacher, a former copyeditor (who has nightmares about errors on menus and signs), and a former magazine editor. She will never be a former reader. Laura is the author of many poetry and nonfiction books, including Water Can Be…, BookSpeak!, and Meet My Family! You can meet Laura at her website, laurasalas.com, where you can also access her blog and her e-letter for educators or learn where to connect with her on social media.
Posted by Melissa Stewart at 12:30 AM