The 5 Kinds of Nonfiction

If you’re a longtime reader of Celebrate Science, you may remember that back in 2012 and 2013, I spent a lot of time trying to develop a Nonfiction Family Tree. This effort to categorize and understand the various kinds of nonfiction and the interplay among them was heavily influenced by the ideas of such nonfiction thought leaders as Marc Aronson, Myra Zarnowski, Sue Bartle, and Mary Ann Cappiello.


Eventually, I gave up on the family tree and started to think about other ways to classify nonfiction, but in 2017 I decided to take a fresh look at the tree analogy, and I came up with this: 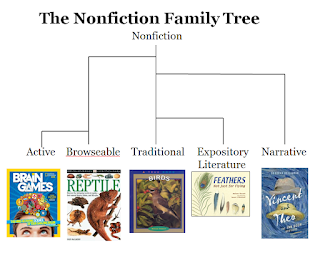 The response was tremendous. Both teachers and librarians thought it was tremendously useful. But as I thought more deeply about the categories and their relationship to one another, I realized that the tree analogy wasn't quite right. So now I'm using this visual: 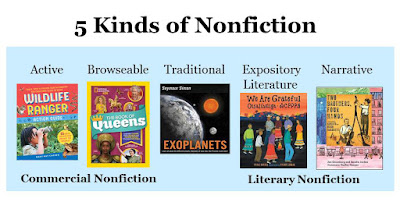 Here's how I describe the categories in what I'm now calling The 5 Kinds of Nonfiction:

Traditional Nonfiction
At one time, nonfiction books for children routinely included concise, straightforward expository writing—prose that explains, describes, or informs. Most books were text heavy, with just a few scattered images decorating rather than enriching the content and meaning. While nearly all nonfiction now includes captivating art and dynamic design that's integral to the presentation, some series books continue to feature traditional straightforward text.


Narrative Nonfiction
In the mid-1990s, children’s authors began crafting narrative nonfiction—prose that tells a true story or conveys an experience. Narrative nonfiction appeals to fiction lovers because it includes real characters and settings; narrative scenes; a theme; and, ideally, a narrative arc with rising tension, a climax, and denouement. The scenes, which give readers an intimate look at the events and people being described, are linked by transitional text that provides necessary background while speeding through parts of the true story that don’t require close inspection.


Expository Literature
When Congress passed the No Child Left Behind Act of 2001, school funding priorities changed. School library budgets were slashed, and many school librarians lost their jobs. Around the same time, the proliferation of websites made straightforward, kid-friendly information widely available without cost, which meant general survey books about volcanoes or whales or the Boston Tea Party were no longer mandatory purchases for libraries.


As nonfiction book sales to schools and libraries slumped, authors and illustrators had to raise their game. The result has been a new breed of finely-crafted expository literature that delights as well as informs. Besides being meticulously researched and fully faithful to the facts, expository literature features captivating art, dynamic design, and rich engaging language. It may also include strong voice, innovative point of view, carefully-chosen text structure, and purposeful text format.


Because this classification system has become so popular, I'm currently writing a book about. 5 Kinds of Nonfiction: Enriching Reading and Writing Instruction with Children's Books will be published by Stenhouse Publishing in 2020.
Posted by Melissa Stewart at 12:30 AM