Behind the Books: Wise Words from a Writing Teacher

When Cathy Mere, a first grade teacher I really respect from Ohio, posted this on twitter: 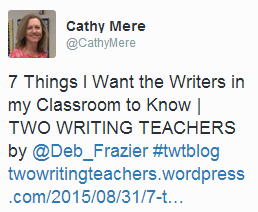 I decided to pop over to the Two Writing Teachers blog to take a peek.


I immediately tweeted Deb Frazier, the teacher who had written the post. (Like Cathy, Deb is a first grade teacher in Ohio. She is also the co-founder of Global Classroom, and she blogs about teaching at Primary Perspective.) And you can see the conversation that followed, with a few other folks chiming in:


The other reason is that Deb touches on one aspect of Common Core, or at least its implementation in American classrooms, that really frosts my britches. I see so many anchor charts entitled Author Purpose with a pie neatly divided into three distinct pieces—entertain, inform, persuade—as if there were only three possible reasons to write. As if!


Since I write nonfiction, the creators of these charts say my purpose must be to inform. But frankly, that’s one of the last things on my mind when I sit down to write a book for kids. And as this post shows, the same is true for my fellow nonfiction authors.


I love the way Deb addresses this issue because she does so through a teacher’s lens. I strongly urge you to sit down with a cup of coffee to read and ponder Deb’s excellent post.
Posted by Melissa Stewart at 12:30 AM