Deadliest Animals: Working with an Editor

When I’m happy with a manuscript, it’s time to send it in to my editor for her feedback. Believe it or not, I almost never meet my editors in person and I rarely speak to them on the phone. Almost all of our communication is via email.


Most of the time, my editor and I use the Track Changes, a feature in Microsoft Word, to communicate. She asks questions or suggests changes. I either accept her changes or I explain why his/her suggestion might not be the best way to go. Then I suggest alternate changes that address his/her concerns.
National Geographic has generously allowed me to share a few examples from Deadliest Animals.


In this first example (click to enlarge), the editor wanted to make everything in the first paragraph singular rather than plural. In the second paragraph, she suggested deleting a sentence to improve flow. She was worried that removing the sentence might leave too little text on the page, but the art/production director said it wouldn't be a problem.

In this second example (click to enlarge), the editor thought we needed to add a bit more information to clarify the point. She suggested a possible alternate wording, but I decided to try something a little bit different.

In this example (click to enlarge), the editor made a very good point. Many of the books in the series are sold to other English-speaking nations. They are also translated into other languages. She pointed out that the expression I had chosen was fun, it wouldn't work well for audiences outside the U.S.

Here is the text for last spread of the book (click to enlarge). The editor thought we needed a build up to the final fascinating fact—that mosquitoes are the deadliest animals on Earth. So I added a new paragraph. But I was worried that there was now way too much text for the spread, so I suggested cutting some text from the third paragraph. 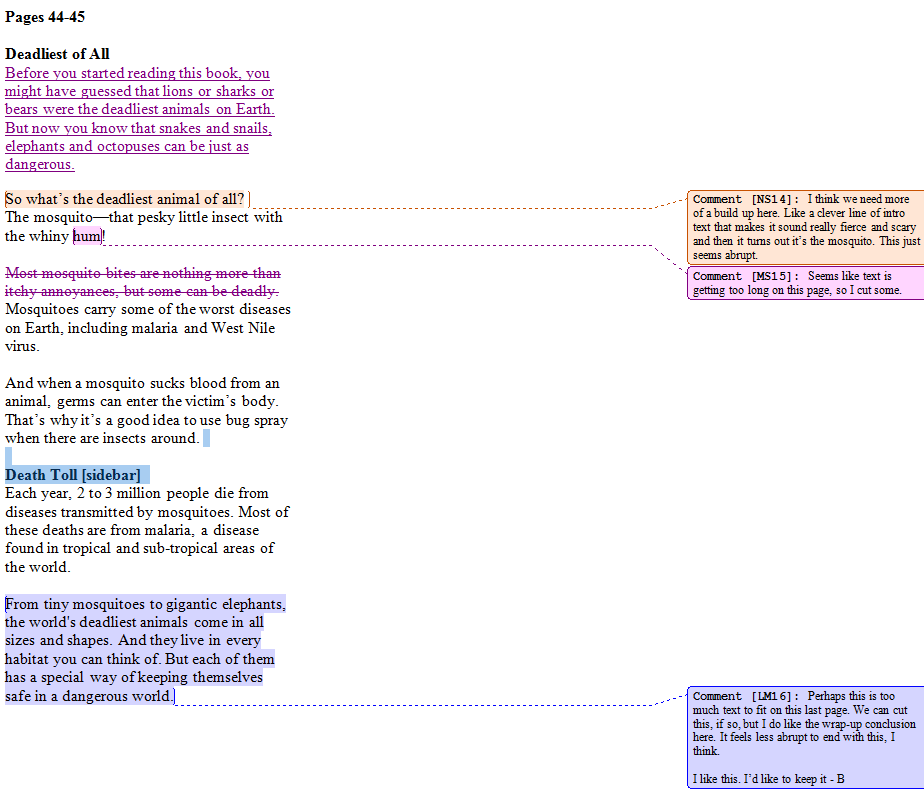 The art/production director was also worried that there was too much text on the spread. She thought we might want to cut the last paragraph, even though she liked it. The editor responded that she wanted to keep it. At this point, we all thought there was too much text, but decided to resolve the problem during the layout stage. Then we’d see how the layout was working and could figure out exactly how much needed to be cut.

To see how the book progressed from this point, come back next week.