Expanding on last week’s post, here are some books and activities that focus specifically on one aspect of K-LS1-1—animals’ need for food. 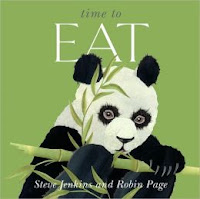 Gobble It Up! by Jim Arnosky

Time to Eat by Steve Jenkins and Robin Page

What’s for Dinner? Quirky, Squirmy Poems from the Animal World Katherine B. Hauth


Activity 2
Guide students as they create an interactive bulletin board with the title, What Kinds of Foods Do Animals Eat?. Ask each student to draw and label two separate pictures—one of an animal and one of the food it eats. Each student must pick a different animal, focusing on the examples included in Time to Eat, Gobble It Up, Pinduli, What’s for Dinner?, Bear Wants More, or Just One Bite.


Place the animal pictures in a column on the left-hand side of the board. Scatter the food drawings around the rest of the board. Staple a piece of string to each animal. Each string should be long enough to reach any food on the board. Use a pushpin to attach each food to the board. To match animals with their foods, students should wrap the proper strings around the pushpins.
Posted by Melissa Stewart at 1:00 AM