The Next Generation Science Standards have a complicated history. They trace back to the 2011 National Research Council report entitled A Framework for K-12 Science Education and went through multiple drafts that were commented upon by, well, pretty much anyone who had any interest in them.


In the end, the drafters developed statements called “performance expectations,” and the idea is that test questions will be closely aligned to them. So I’m going to write out the performance expectations (PEs), word for word, and work directly from them. I’m also going to include any “clarification statements” specified by the people who drafted the PEs.
Here's the first kindergarten life science PE:

K-LS1-1. Use observations to describe patterns of what plants and animals (including humans) need to survive. [Clarification Statement: Examples of patterns could include that animals need to take in food but plants do not; the different kinds of food needed by different types of animals; the requirement of plants to have light; and, that all living things need water.]


And here are some books that can be used to directly address the PE: 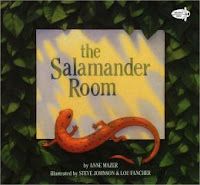 The Salamander Room by Anne Mazer


From Seed to Pumpkin by Wendy Pfeffer


Activity 2
Invite your students to create visual acrostic poems that reinforce the basic needs of plants and animals. They may choose any of the following as a starter word: water, sunlight, air, or food. Here’s an example:


A  [picture of an apple tree]


E  [picture of an elephant]


When the students are done, you can post their poems on a bulletin board entitled What Plants and Animals Need to Live and Grow.
Posted by Melissa Stewart at 1:00 AM