Most of the CCCS for ELA standards focus on one major theme or skill across the grade levels, but Reading Information Text standard #6 is a real hodgepodge.


Even though the goals for grades K-2 and quite different, I’ve identified a small group of books that students can use at all three grade levels:
Actual Size by Steve Jenkins
A Butterfly is Patient by Dianna Hutts Aston (illus. Sylvia Long) 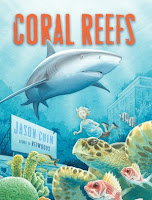 Q: Where do young beetles go on Saturday nights?
A: To the grub club.


Q: Why didn’t the butterfly go to the dance?
A: Because it was a moth ball.


Q: What did the dragonfly call the mosquito?
A: Lunch.

Q: What happened when the honeybee called its hive?
A: It got a buzzy signal.


Q: Why was the entomologist a hero?
A: He saved a damselfly in distress. 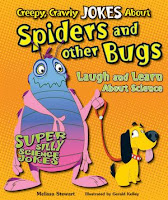 Looking for more super silly jokes about the weather? Check out Creepy, Crawly Jokes About Spiders and Other Bugs.
Posted by Melissa Stewart at 5:46 AM No comments:

Being an analytical, left-brain-thinking sort of person, I started yearning for a model to better understand relationships between different kinds of nonfiction and their characteristics last summer. So I decided to start piecing one together, and before I knew it, a structure had emerged—a family tree.


I first blogged about my ideas here in September. I fully acknowledged that it was a work in progress and imagined that I’d develop a different view of things over time.


But so many people responded with helpful insights, that I revealed a modified family tree in thispost in November. And the feedback kept on coming. So now I’m putting fort yet another version. Let’s call it Nonfiction Family Tree 3.0. 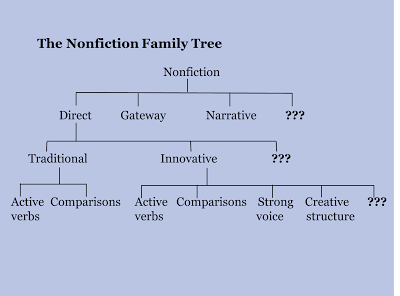 How is this version different from its predecessors? Well, for starters, I’ve adopted some new terminology. And to me, it’s an important change.


I’m calling what we often think of traditional nonfiction writing “direct nonfiction.” It’s straightforward and full of facts. Done badly, it can be dry and boring. But done well, it helps us understand the world and its possibilities and our place in it. I’m coming to think of it as nonfiction for left-brain thinkers (though I acknowledge that’s an oversimplification).


In the opposite corner, we have narrative nonfiction. My personal feeling is that, in general, it appeals more strongly to right-brain thinkers. This includes most librarians and elementary teachers and kidlit advocates, and as far as I’m concerned, that’s one reason it is the current darling of awards committees.


I see many people in the kidlit community saying things like, “narrative nonfiction is wonderful because kids respond to story. They want to feel an emotional connection to a central figure in a narrative.”


What I say in response is that SOME kids respond to story. They want to feel an emotional connection to a central figure in a narrative. Other kids . . .well, not so much. In any case, it’s low on their list of priorities.


I have still included March Aronson and Jonathan Hunt’s notion of “gateway nonfiction” on my tree, but I’m feeling less confident about how it fits into the scheme of things.


I have to admit that after reading Steve Sheinkin’s wonderful, awesome, amazing BOMB, I toyed with the idea of adding a category called “nonfiction thriller,” but I wasn’t sure about creating a limb on the tree for just one book. IMHO, Sheinkin’s masterpiece is a game changer—something to attract those kids who will grow up to love Michael Crichton or Tom Clancy.
I continue to include open branches and twigs because I expect to make additional changes in the future as nonficiton for kids continues to evolve.


So what do you think of this new version? What else should we be thinking about?
Posted by Melissa Stewart at 4:16 AM No comments:

As I said last week, my A Place for . . . books are perfect for teaching the problem/solution structure. But there are some other great books out there that you can also use: 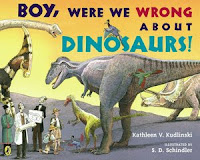 Boy, Were We Wrong About Dinosaurs by Kathleen Kudlinski


Boy, Were We Wrong About the Solar System by Kathleen Kudlinski


It’s also worth noting that EVERY fiction book is structured in this way. The character’s conflict is what keeps us all reading. We want to see what happens.
Posted by Melissa Stewart at 5:21 AM 1 comment:

I stumbled across this fun video about identifying nonfiction text features and thought you might enjoy it.


Enjoy the weekend.
Posted by Melissa Stewart at 3:32 AM No comments:

Behind the Books: Kids Say the Darnedest Things!

A few weeks ago, I Skyped with a great group of kids at Rock Springs Elementary School in Lawrenceville, GA. I’m not sure who enjoyed it more—them or me.


Afterward, the school librarian and their classroom teacher (shout out to Mrs. Schmidt and Mrs. Zawaki) gave the students an opportunity to blog about their experience and what they learned. Let me tell you, it made for fascinating reading.


You can read all of their posts here, but I’ve included some of my favorite comments below. (I’ve corrected a few spelling mistakes and typos so the text is easier to read.)


Some students were surprised by how long it takes to write and publish a book:


“I had no idea on this Earth that a rough draft sometimes took years to be perfect.”


“Skyping taught me that when writing I should always take my time and spend a lot of time revising and editing.”


“Mrs. Stewart is really patient because when she makes her books it takes about 4 long years for the 1st library to have it out.”

Some of their comments made me laugh:


“I thought it was going to be boring, but she totally proved me wrong!”


“It was great meeting someone who has a great taste of nonfiction texts.”


Some may want to consider careers as book critics:


“I have read many of her books and each one is worth my reading time.”


“Melissa . . . writes enough information but at the same time she puts her books in a funny way to not make it boring.”

Some students were inspired:


“What she talked about made me want to read more of her books, and to write some of my own.”


“I don't really like writing, but Melissa helped me understand how to make writing interesting.”


And some inspired me:


“Meeting with Melissa Stewart will be an event that I will always remember.”


It was a great hour-long discussion.
Posted by Melissa Stewart at 1:29 AM No comments:

Teaching cause and effect can be pretty tough. I remember listening in on a lunchroom conversation among a group of teachers facing this challenge back in 2000. And that’s the main reason, I structured my A Place for . . . books the way I did. That makes them perfect for teaching cause/effect as well as problem/solution text structures.


To help you out, I’ve included some activity sheets on my website. 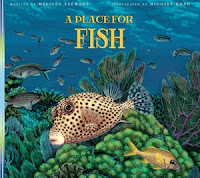 A Place for Turtles by Melissa Stewart (illus Higgins Bond)


You can combine the first three of these titles with: 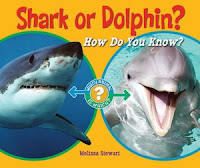 The launch of A Place for Turtles is so momentous that it deserves more than just one post.

While I was working on the book, my brother in law, energy and environmental writer Peter Fairley, visited and we all took a trek to one of my favorite turtle-y places—the Oxbow Wildlife Refuge in Harvard, MA. 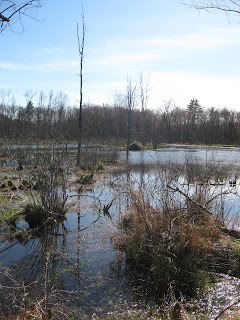 It was a beautiful, sunny spring day, and we saw hundreds, maybe even thousands, of turtles sunning themselves on logs and rocks (not to mention a very cool beaver dam).

Here are photos of two turtles we encountered on the trail—a snapping turtle (top) and painted turtle (bottom). 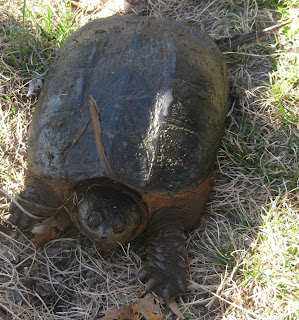 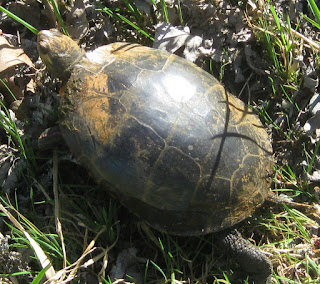 Behind the Books: It’s Turtle Time

This is the sixth and final (at least for now) book in the A Place for . . . series. When I submitted the proposal for A Place for Butterflies to my editor way back in 2001, I had no idea that I was embarking on an incredible 12-year journey.

I have learned so much while researching and writing these books, and I’m delighted that the series includes an insect, a mammal, an amphibian, a reptile, and a variety of fishes and birds. Hopefully, children who read these books will come to understand that the creatures around us face many challenges, and that by working together, we can make a difference.

As my titles suggest, my greatest hope is that there will always be a place for the vast array of living things that share our planet.
Posted by Melissa Stewart at 1:53 AM 1 comment:

You have to admit that I haven’t been plugging my own books too much this year, but today, I will. I have a series of books that is absolutely perfect for discussing compare /contrast text structures with your students: 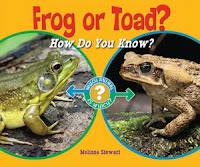 Alligator or Crocodile? How Do You Know?

Butterfly or Moth? How Do You Know?

Shark or Fish? How Do You Know?

But there are other books that also work well for this kind of lesson. Many of them are by the incomparable Steve Jenkins. What can I say. The main is a genius. 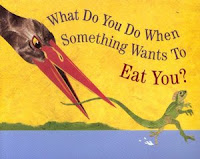 How Many Ways Can You Catch a Fly? by Steve Jenkins


What Do You Do When Something Wants to Eat? You by Steve Jenkins


Wings by Sneed Collard
Posted by Melissa Stewart at 6:06 AM No comments:

Q: Why did the comet head toward the edge of the Solar System?
A: It needed some space.

Q: Why do some asteroids come so close to Earth?
A: They like the view.


Q: What do astronauts use change the radio station when they’re on the Moon?
A: A lunar tuner.

Q: What does the Sun do when it’s thirsty?
A: It gets out its sun glasses and melts a comet.


Q: What did the alien say as his spaceship passed Mars?
A: Red alert! Red alert!

Looking for more super silly jokes about the space beyond Earth? Check out Out of this World Jokes About the Solar System.
Posted by Melissa Stewart at 6:42 AM No comments: